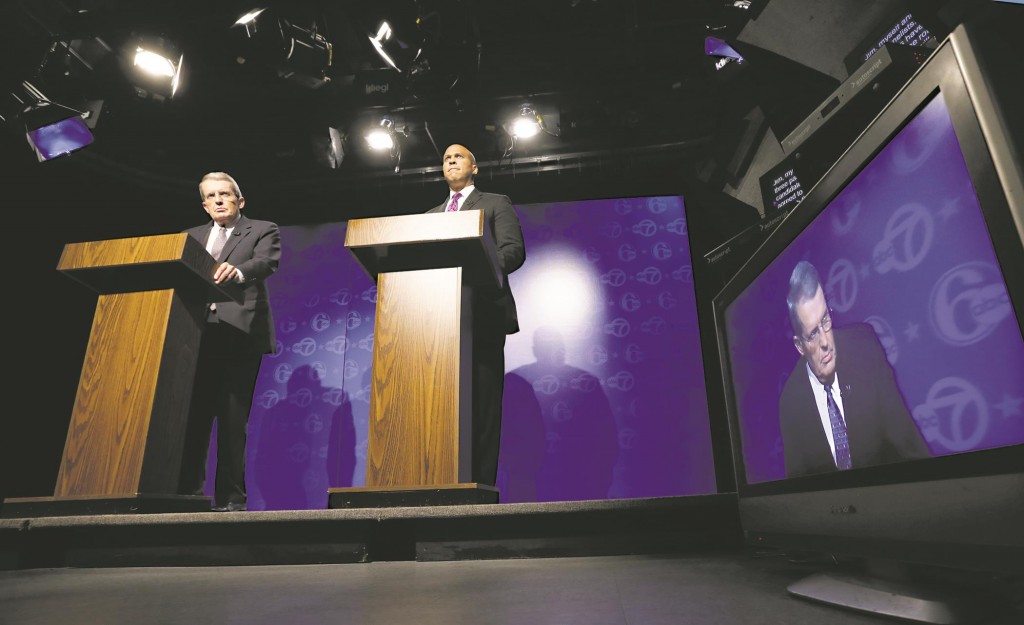 New Jersey’s U.S. Senate candidates clashed Friday over the minimum wage, immigration policy, jobs and other issues in their only debate of the race, now heading into the last full week of campaigning before the Nov. 4 election.

Democratic Sen. Cory Booker and Republican challenger Jeff Bell sparred for under an hour, answering questions from a five-member media panel. Booker, who won a special election last year, and his challenger occasionally became testy with each other, especially when Bell at one point interrupted Booker and the incumbent questioned Bell’s civility.

Booker also repeatedly linked Bell to the tea party movement, suggesting Bell’s views are out of step with the majority of voters. “He’s part of a movement that is going to be slamming and slandering and not stopping that madness,” Booker said.

For his part, Bell tried to link Booker to President Barack Obama, whose approval ratings are sagging. “You pay lip service to bipartisanship,” Bell said. “But you just advocated something that would completely foul the immigration debate, having the president do everything by executive action.”

Booker also took issue with Bell’s recent move to New Jersey, and Bell responded that he decided to run because of the Federal Reserve policy of zero percent interest, which he called “disastrous.”

Bell, 70, the GOP Senate nominee in 1978, said it is the wrong time to raise the minimum wage and that hiking the federal $7.25 per hour rate would price young workers out of the market.

Booker, 45, disagreed and said he’s spoken to a number of people who could be helped by raising the rate.

“My opponent says it’s a bad time to do what’s right,” Booker said. “It is a good time to raise the minimum wage. We are America. Nobody should work fulltime and find themselves under the poverty line.”