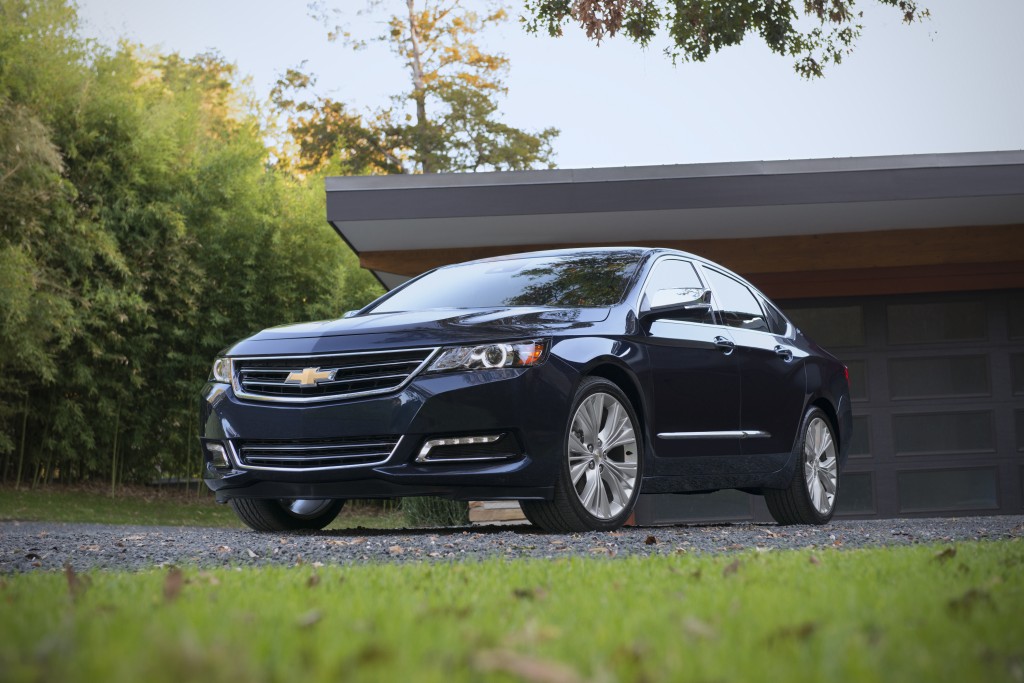 Chevrolet’s redesigned Impala full-size sedan continues to wow consumers a year after its introduction as a 2014, and it returns for 2015 with a couple of new features, including automatic stop-start for the 2.5-liter engine.

Also new is a built-in wi-fi hotspot that gives passengers connectivity on the go for all of their mobile devices from smartphones to tablets and laptops, all on a fast LTE network wherever the signal is available.

The Impala continues to pick up awards. The car has been named the Cars.com Best Car of 2014, and it’s also on Kelley Blue Book’s list of the 12 Best Family Cars for 2014.

To help boost city fuel economy, the stop-start system — which first began appearing on hybrid vehicles — shuts down the gasoline engine when the car comes to a stop, such as at a traffic light, then instantly restarts it as the driver lifts his foot off the brake pedal.

This feature boosts the fuel economy of the Impala with the 2.5-liter four-cylinder engine by 5 percent, to 22 mpg, General Motors says.

Overall, this is arguably the best full-size sedan in its class, and perhaps even beyond its class.

Even Consumer Reports has listed the Impala as tops in its class, behind such stalwarts as the Toyota Avalon and Ford Taurus. For an American car to get such praise, it has to be good, and it is. Forget the Impala it replaced – this is a completely new car that has little in common with its predecessor.

And unlike its predecessor, the Impala no longer is primarily a rental car; it’s a consumer vehicle worthy of parking in front of big houses with paved circular driveways.

Chevrolet’s flagship sedan is larger and roomier than the previous model, with a stylish exterior and quite refined cabin. It’s such a compelling new product that it credibly could be shopped against some of the premium brands, such as Lexus, Mercedes or BMW.

Trim levels include the base LS, the midlevel 1LT and 2LT models, and top-end 1LTZ and 2LTZ.

The Impala is to the Chevrolet Malibu what the Toyota Avalon is to the Camry, the Ford Taurus is to the Fusion, and the Nissan Maxima is to the Altima: a step up for people who want something a bit larger and fancier than the mass-market midsize sedans.

Three engines are available for 2014, but that drops to two for 2015. All have direct fuel injection.

The eAssist powertrain, also offered in the Malibu sedan, uses a small electric motor as a booster, and has EPA ratings of 25 mpg city/35 highway.

Impala’s V-6 is a version of the engine used in the base Chevy Camaro, and is the most powerful normally aspirated engine in the large-sedan segment. It’s the one that provides the sportiest performance but lowest fuel economy – 19 city/29 highway.

The V-6 is standard in the 2LT and 2LTZ models, so it was included on our tester. It gives this family sedan nearly the same kind of pep as it does in the Camaro, which makes the Impala lots of fun to drive.

But the base 2.5-liter four-cylinder has plenty of power for everyday driving, and should be fine for most people. It’s rated at 21 city/31 highway without the stop-start feature, or 22/31 with it.

Handling is almost sport-like, holding the curves quite easily, and braking is straight and sure. The gears shift smoothly, and with a kick on the gas pedal, the V-6 will take the car from zero to 60 mph in 6.8 seconds. With the redo, the Impala also got a new electric power-steering system and enhanced suspension, designed to improve road handling.

All five passengers ride in comfort, as the car has more space than its predecessor, including additional front and rear legroom. Total cabin space is 105 cubic feet, which is huge in today’s market.

The Impala’s interior also is very quiet at highway speeds, thanks in part to Bose active noise cancellation.

Headroom is enough to accommodate taller people, even in the outboard rear seating positions.

The trunk has a generous 18.8 cubic feet of space, more so than even some of the crossover utility vehicles. There are several interior storage areas, including a roomy center console and a space behind the in-dash audio screen to hide valuables such as cellphones.

Standard safety features include the 10 air bags, antilock disc brakes and tire-pressure monitoring, along with collision-mitigation braking and the other high-tech gear. The car has low-profile projector-beam high-intensity-discharge headlights, and the LTZ models come with LED daytime running lights.

Smartphone integration is accomplished through the newest, voice-activated Chevrolet MyLink audio/infotainment system, which includes a customizable eight-inch color screen. A variety of internet apps, such as Pandora, can be accessed through the audio system when connected to a compatible phone. Bluetooth capability is included.

OnStar and XM satellite radio are standard; and an in-dash navigation system is optional. But OnStar has its own navigation features, including turn-by-turn directions (requires a subscription).

There are chrome exterior accents and badges, including the Chevy bowtie on the grille. There are dual chrome exhaust tips, as well.

The optional power sunroof comes with a second-row skylight. Rear passengers had adjustable air vents, a small storage cubby and a 120-volt power outlet on the back of the center console, which was part of the $700 premium audio package. Also included were two rear reading lights, small seatback pockets, two cupholders on a pull-down center armrest and bottle holders in the doors.

Up front, both occupants ride in comfort in the bolstered bucket seats, which were heated and cooled. The cooled seats were part of the $1,035 Comfort and Convenience Package, which also included memory for the driver’s seat, outside mirrors and heated tilt/telescopic steering wheel; heated outside mirrors with puddle lights on the ground and built-in turn signals; auto-dimming for the driver’s outside mirror and rearview mirror; a universal garage/gate opener; and premium carpeted floor and trunk mats.

Storage areas up front were perfect for portable electronics. There were bottle holders and map pockets in the doors, a rubber-lined cubby with a removable tray under the armrest and a covered storage space with a 12-volt power outlet under the dash. Another small storage space, perfect for a smartphone, was behind the dual cupholders in the center console.

Inside the lighted armrest bin were another 12-volt outlet, two USB ports, a memory-card reader and an auxiliary input jack. A storage space was even provided for an umbrella, at the top of the door pockets.

An infotainment touchscreen pops up from the middle of the dash, with a hidden storage area behind it that also includes a USB port. It’s a great place for keeping smartphones and iPods out of sight.

Highlights: A complete redesign for 2014 turned a former rental car into a stylish, classy family sedan that can hold its own among even some of the premium brands. This is Chevrolet’s flagship sedan, with lots of room, plenty of standard amenities, and a smooth, quiet ride.

Negatives: Can get pricey at the upper end.

Side air bags: Front seat-mounted; side-curtain for both rows.