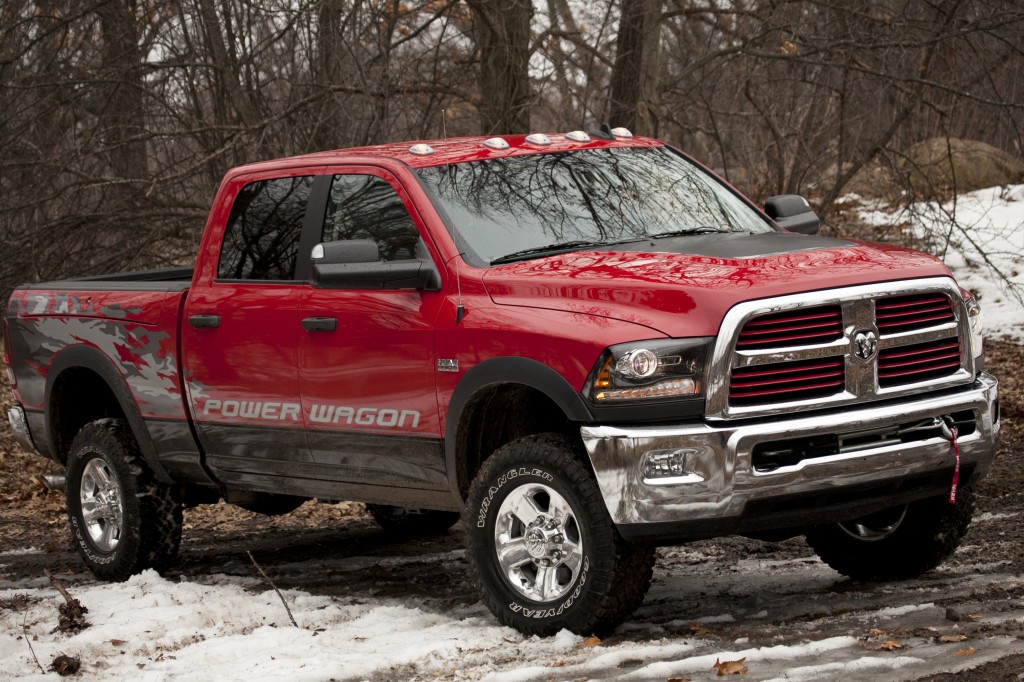 Nobody crowded me in the big blue Power Wagon — a glaring, heavy-metal masher that looked as if it had just lumbered out of a swamp.

Gray camouflage graphics clung to the pickup’s giant flanks like radioactive mud, while a huge hook from its Warn Winch hung ominously from a slot in the bumper.

A toothy grille larger than some garage doors gave the truck a hungry look — as if it might soon need a little snack of Sentra or Yaris.

Even parked, it dripped menace like sweat from a street fighter.

I thought the pumped-up, sky-high 2014 Ram Power Wagon might just be the perfect commuter vehicle.

Once you pull yourself into place in the lofty 7,100-pound beast — I recommend a running start combined with a small ramp — it quickly clears the fast lane on a scenic expressway.

As you may know, the Power Wagon is one of those gigantic specialty pickups vaguely similar in some ways to Ford’s highly successful F-150 Raptor desert-runner.

But how much of a market can there possibly be for a $56,000 pickup built to crawl over rocks in the back country — a truck that won’t fit in many garages, parking lots or budgets?

More than we might imagine, I suspect. Like it or not, we are a nation of pickup-truck drivers, with the Ford F-series, Chevrolet Silverado and Ram occupying the No. 1, 2 and 5 rankings, respectively, for sales last year.

(The Toyota Camry and Honda Accord were sandwiched, literally, in between, in the No. 3 and 4 spots.)

And with pickups also the industry’s most profitable vehicles, every niche can be a mini gold mine.

Actually, the Power Wagon offers a bit more practicality than you might expect from something looming 6 feet 10 inches above earth.

Based on a Ram Heavy Duty four-wheel-drive pickup, the Power Wagon has a two-inch lift for even more ground clearance, Bilstein monotube shocks and knobby 285/70 tires on polished 17-inch wheels.

But the one I had recently also came with satellite radio, Chrysler’s UConnect system and integrated voice command with Bluetooth.

Still, let’s be honest here: Big Blue might not be all that comfortable at a prim-and-proper dinner party.

Occupying most of my 1955-vintage driveway, the four-door, crew-cab truck had all the gritty bulk of a steel-mill locomotive.

A raised hood added to the truck’s dramatic bulk. I can’t tell you much about the pickup bed, because I never saw it. Height restrictions — my own — prohibited it.

Excesses aside, I admire the Ram’s tall, proudly square body with its tightly cut, no-nonsense sides, vertical taillamps and minimal trim. (It may be the best in the segment.)

If you seek subtlety, though, the Power Wagon might be a bad choice.

Besides its block-out-the-sun stance and bright-blue paint, my truck shouted “Power Wagon” in three-inch tall letters on the lower portion of the doors.

And then, of course, gray camo-graphics covered each rear fender like acid burns.

Personally, I thought the strutting truck begged for one of Ram’s growling Cummins diesels.

Unfortunately, the Cummins adds too much weight to a truck that already lugs a trail-flattening load when it goes off-road.

Instead, Power Wagons get Ram’s truck version of the 6.4-liter Hemi V-8, producing 410 horsepower and 429 pound-feet of torque.

It was bolted to a six-speed automatic and spun 4.10 big-boy gears in the rear.

Although the deep-breathing Hemi had to push a real wheelbarrow full of steel around in the Power Wagon, it did a reasonably good job.

The truck moved away from stops pretty smartly, accelerating to 60 in about 8 seconds, according to Car and Driver.

In city driving, the engine felt torquey and willing.

But it seemed to strain some when asked for more speed above 75 — possibly nature’s way of governing 3.5-ton Power Wagons.

Don’t ask about fuel economy, because heavy-duty pickups aren’t required to disclose their city and highway numbers. The truck I had averaged between 12.3 and 13.1 miles per gallon most of the time.

Though the Power Wagon enjoys a solid reputation for its off-road abilities, I didn’t try any of that, nor did I attempt any challenging climbs.

Nonetheless, I drove it like most people probably will — using it during the week as my primary transportation to work and other places where it would fit.

Like the Raptor, the Power Wagon doesn’t make you pay heavily for driving around in a pickup bigger than some barns in Arkansas.

While its ride lacked some of the refinement in the Raptor, it stretched out reasonably well on smooth pavement, feeling just slightly fidgety.

On some of the moonscape streets around downtown Dallas, though, it could get bouncy and stiff.

Also, forget screeching around corners in a truck tall enough to use as a platform for cleaning second-story windows.

Let’s just say the Power Wagon shuffles through curves like a typical pickup — with all-American confidence, not competence.

A massively square gray dashboard maintained the exterior’s design theme, wrapping over a black instrument panel and around a large center stack.

The seats were stitched in gray cloth with patterned centers that matched the plastic door panels and gray headliner.

As you might guess, legroom and headroom in the big-bodied pickup was immense, able to easily swallow a couple of football players in back.

Some folks might fault all the hard surfaces inside the high-dollar Power Wagon, but they felt to me as if they would be comfortable wearing mud and rock dust.

So where exactly does the brutal, bold Power Wagon fit in our increasingly timid universe? Wherever it wants, I guess.

Fuel economy: Not required to be disclosed

Performance: 0 to 60 mph in approximately 8 seconds

SOURCES: Ram division of the Chrysler Group; Car and Driver