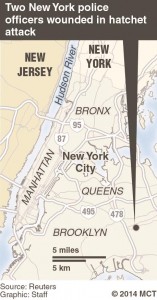 A brazen daylight hatchet attack against a group of police officers on a busy New York street was a terrorist act by a reclusive Muslim convert who ranted online against America, the police commissioner said Friday.

Police were examining Zale Thompson’s computer for clues about a motive for the Thursday assault that left one officer seriously injured and ended with Thompson being killed by police. Police Commissioner William Bratton said Thompson’s browsing history included organized terror groups, beheadings and the shooting in Canada earlier this week that officials there have called a terrorist attack.

Thompson was not on any watch lists, and officials found no indication he sought any training or affiliation to any groups.

Still, Bratton said he was comfortable calling it a terrorist attack.

Bratton said investigators were trying to determine whether the attack was planned or spontaneous but believe Thompson was self-radicalized. His father told officials he converted to Islam about two years ago and was described as a “recluse” who had been depressed lately.

Thompson, 32, had a history of run-ins with the law over domestic violence in California in 2003 and 2004, police said.

Officer Kenneth Healey remained hospitalized on Friday with a head wound. The bystander, a 29-year-old woman, also was being treated for a gunshot wound to the back.

This article appeared in print on page 5 of the October 27th, 2014 edition of Hamodia.