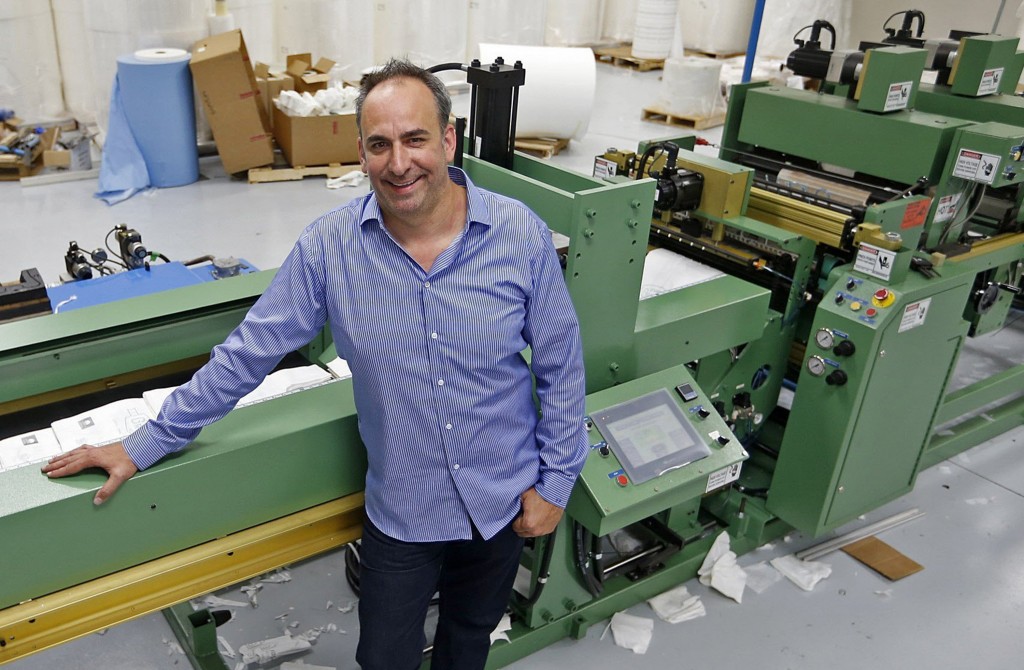 Shoppers are being forced to change how they tote their groceries home.

Those plastic bags that often get repurposed to carry out clumps of cat litter or transport muddy cleats soon will cost shoppers 5 cents apiece in Dallas. And they were recently banned in California.

But Dallas-area company Metropak Inc. believes it has a solution to the world’s plastic-bag waste problem.

The family-owned company has created and patented a biodegradable alternative called RagBags. Metropak can make the cloth bags at a rate of 80 per minute on a proprietary 90-foot machine. The company spent $1 million to build the machine, which also allows Metropak to put “Made in U.S.A.” on every bag.

Shaped like the traditional plastic grocery store bag, the RagBag is washable and reusable. Once tattered, it has a second life as a super-absorbent rag, hence the name. Finally, it can be tossed into the compost pile.

Company CEO Eric Grossman says he was encouraged to find a solution as his ring binder labeled “Ordinances by state” ballooned. “When a customer calls and says we’re opening a store in a new city or state, they expect us to provide them with the right bag for each market,” he said.

“It didn’t used to be so complicated, but necessity is the mother of invention.”

Grossman bought Metropak from his father with childhood friend Edward Hanson in 1997.

Both grew up in Dallas, and they have been pals since third grade. They expect company sales to be just under $25 million this year and double that in two years from the new RagBags business.

Grossman doesn’t have a suggested retail price for RagBags. He’s leaving that up to the stores, but said it’s much less than the sewn polypropylene bags that are sold for a couple of dollars as an alternative in many stores. He estimates that retailers will price each bag between 50 cents and 75 cents.

Green Grocer stores in Dallas and Chicago are the first ones to use RagBag. They started introducing them earlier this month.

Cassie Green, co-owner of the grocery company, said she is giving the bags away initially.

Green says that the RagBag could eventually save her stores money. The single-use grocery bags Green Grocer uses now feel like plastic but are made from vegetable starch and are biodegradable. The problem is that they cost her 10 cents each. That compares with a fraction of a penny for the bags that most grocers use.

“About 40 percent of our customers bring their own bags or don’t take one,” Green said. She believes more customers will go for the RagBags, which she’s been testing. So far, they’re holding up after three and four washes, Green said.

Metropak will add two production lines by next year, and Grossman believes the RagBag business will soon keep 10 machines running. The company is approaching all kinds of retailers that use single-use plastic bags, such as Home Depot and Bed Bath & Beyond.