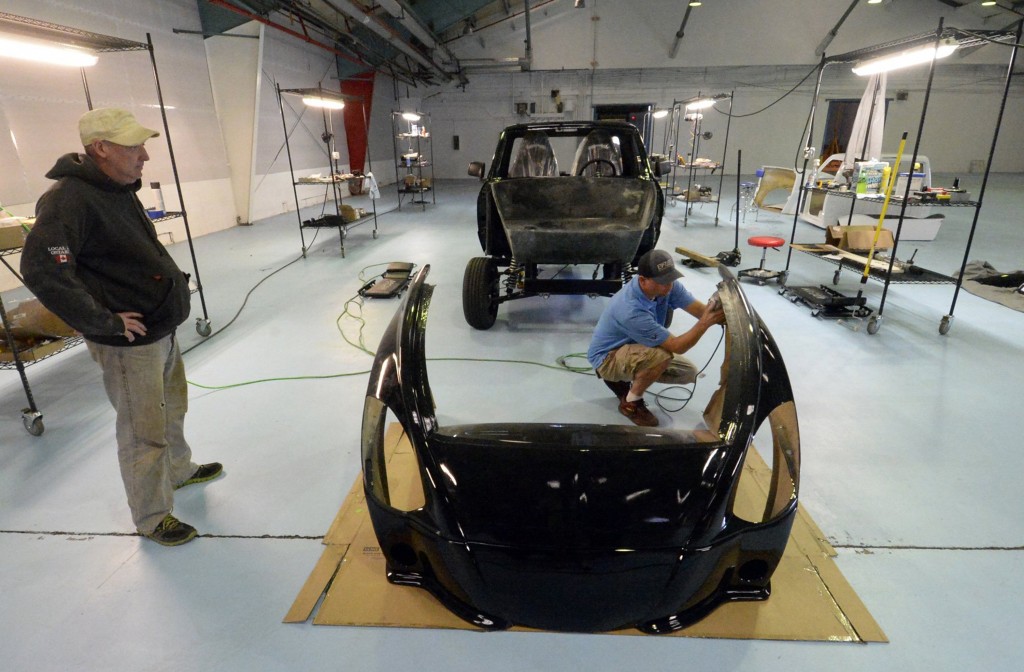 Forget about the gas-powered automobile, they told him. Building electric cars was his best bet for survival amid a nationwide automotive-industry crisis in 2008.

Agnew, 60, recently debuted the Condor 2015, an all-electric pickup truck designed to haul fleet and deliveries, conserve energy and save buyers thousands in fuel costs. Capable of hauling 1,000 pounds and reaching up to 80 miles per hour, the truck was produced in Charlotte, N.C., by EV Fleet Inc., a manufacturing startup Agnew formed this year to assemble and sell electric pickups.

The Condor is a strategic response to what Agnew said he didn’t see on the market: pickup trucks built with motors that ran on energy stored in batteries and no gas components. Yet the Condor’s creation comes just as analysts question the long-term viability of the nascent electric-vehicle industry.

EV Fleet built their own truck after Agnew and his partners spent more than $5 million over eight years, building prototypes and converting cars to electric-powered vehicles. Those cars, while operational, experienced a variety of supply-chain issues, prompting a refocus in product development, Agnew said. It took more than 500 attempts to perfect the Condor’s design — from the chassis to the frame to the cab, Agnew said.

More than 60 potential buyers — mainly fleet and transportation managers for municipalities and private businesses — have gone on test rides. The company has already started taking orders. The trucks sell at $43,000 after a federal rebate that awards up to a $7,500 tax credit to electric-car buyers.

Agnew estimated that small fleet owners — those who manage 25 trucks or so — can eliminate up to $625,000 over five years in gasoline costs by switching to electric-powered vehicles.

By year’s end, Agnew said he hopes to expand the facility and add 13 more employees who would produce nearly 300 trucks each month.

“We provide a truck that works as hard as a gas-powered truck, and you can drive it for less than 2 cents a mile,” he said. “It makes sense.”

One reason behind the surge is convenience. Electric-car owners can plug their cars into electrical outlets outside their homes or in their garages.

“There are more electric outlets than there are gas stations,” Mallard said. “More and more of the actual quick-charge stations are being installed.”

There were 20,138 car-charging stations nationwide last year, up from 6,310 by January 2012, according to Recargo, a software company pushing plug-in car innovation.

Agnew, who has loved cars since he was an adolescent racing go-carts and motorcycles, toyed with electric vehicles years before he started making them.

After a stint in the Air Force, he studied chemistry and mathematics in college. He recalls paying his way through school by working on cars and doubling as an engineering consultant. He later obtained a certification in Six Sigma, which indicates mastery of analytic tools used to improve manufacturing. In the 1990s, he built electric cars as a hobby. He moved to Charlotte while working for Toyota.

As gas prices soared, Agnew said his colleagues in Detroit told him he should focus his talents on electric cars. Agnew saw his opportunity.

He started companies focused on making electric vehicles. In 2012, his former company, Vision Motor Cars, unveiled the Everest pickup truck. However, Agnew said shoddy material from manufacturers in China delayed the truck’s deployment. That’s when EV Fleet decided to build an original truck “from the street up,” he said. Construction on the Condor started in March.

“It started at zero a few years back,” Whiston said, and “it’s come a long way since then.” But Whiston cited figures from market-research firm IHS estimating that production of electric vehicles will equal only 1 percent of global automobile production in 2020.

“Those drivers have already established that they will buy a small pickup truck, and they will use it as a daily driver or business vehicle,” he said. “They will never give it up.”

— The government route was not for him.

When Agnew began building electric cars, he thought he would be able to get federal loans and grants to help him finance production. But after three years of back-and-forth trips to Washington, D.C., dealing with lawmakers and lobbyists and filling out paperwork, he decided to refocus his funding efforts.

“I didn’t give up,” he said. “I just decided I’m not going to spend any more money chasing after grants, low-interest loans and all the things the government said they wanted to do.”

— The investors are out there.

Instead of looking to the government, Agnew started seeking investors to back his projects, looking for people who had similar interests and would benefit from his company’s success. He didn’t expect to find those results from an oil company. Agnew and the oil company’s owner shared the same lawyer, he said. Agnew’s lawyer agreed to facilitate a meeting between the two.

“I can tell you the kind of investor we were not looking for, and that was an oil company,” Agnew said, laughing. “And that’s exactly who financed us.”

“Just about anybody in the automobile business knows the consumer is going to make a space for electric vehicles,” Agnew said, adding that the major manufacturers likely won’t follow suit. “It has to come through an independent company like ours.”