Politics Cuomo, Astorino Face Off in Only Debate
Politics 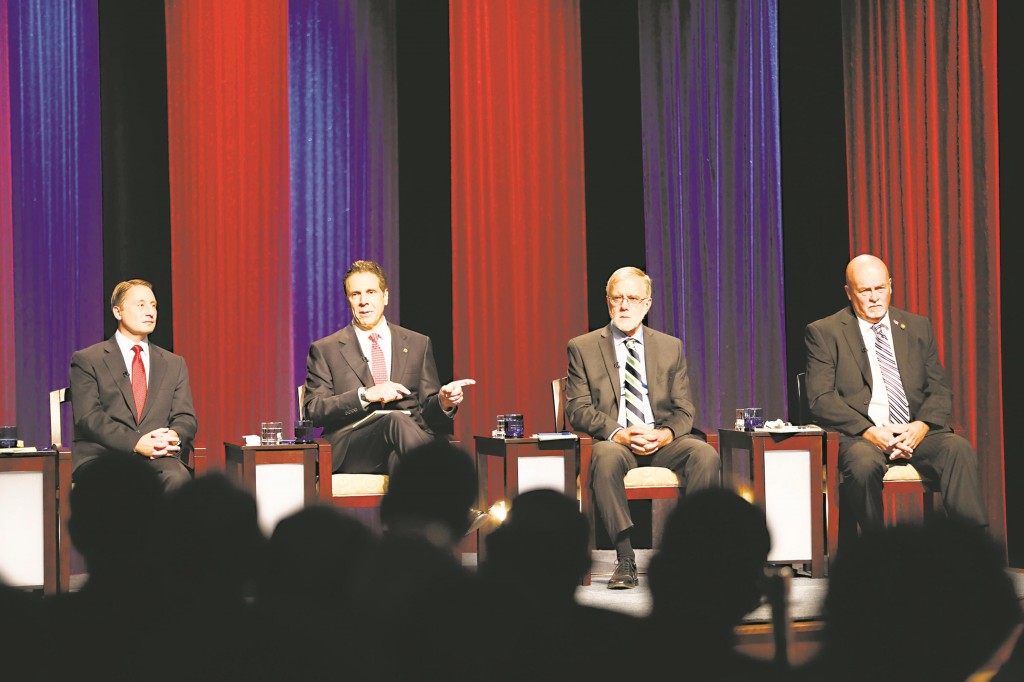 Democratic Gov. Andrew Cuomo and his Republican challenger traded insults and clashed over the economy and corruption Wednesday while two third-party candidates worked to get traction in the only scheduled debate in the governor’s race.

For the first time acknowledging Rob Astorino, Cuomo claimed that the Westchester County executive was too conservative to lead New York, which he termed a “progressive” state. He said his administration has energized the economy, cut taxes and reduced government gridlock.

“Our taxes are at historic lows; our jobs are at historic highs,” Cuomo said. “And we respect people’s rights. We have Democrats and Republicans working together in Albany. There is more work to do to be certain but the arrows are pointing in the right direction.”

Astorino criticized Cuomo’s handling of the economy and government corruption, predicting that Cuomo “may be indicted” following allegations that his administration attempted to meddle with an anti-corruption commission when it began investigating groups linked to the governor.

“Four years ago Andrew Cuomo pretended to be the reformer,” Astorino said. “Unfortunately right now he is swimming in the cesspool of corruption.”

Cuomo, who has said there was no inappropriate meddling with the commission’s work, dismissed Astorino’s allegation, calling it “truly outrageous.” He then accused Astorino of fighting a settlement under which Westchester agreed to build 750 affordable housing units in mostly white areas and market them to minorities.

Astorino countered that Cuomo was playing “the race card” and that he has only tried to defend local zoning authority against a federal attack.

“Democrats and Republicans are the problem,” he said. “Just vote Libertarian, one time.”

Green Party candidate Howie Hawkins, who came in third in the 2010 race, voiced opposition to hydraulic fracturing and said the state needs to raise the minimum wage to $15 an hour.

“I wish this was the first of several debates,” Hawkins said. “We’ve barely touched on the issues.”

Astorino supports hydraulic fracturing, or fracking, while Cuomo has said he wants to wait for a study on fracking’s health effects before deciding whether to allow the drilling practice.

In a dramatic moment, he turned to Cuomo and asked him to “raise his right hand and swear” that he was not subpoenaed by federal investigators for interfering with the anti-corruption Moreland Commission.

In response to a question, Cuomo, who is said to harbor presidential ambitions, gave an unequivocal “yes” to a promise to serve a full four-year term if reelected.