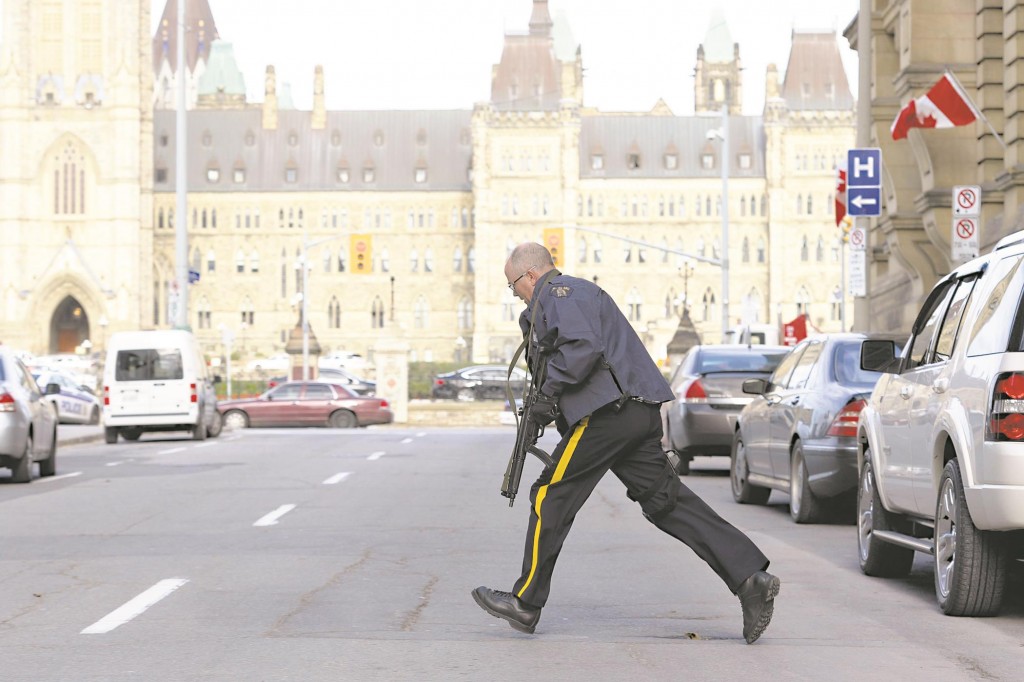 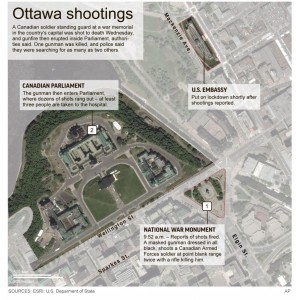 Canada’s capital was jolted on Wednesday by the fatal shooting of a soldier and an attack on the parliament building in which gunshots were fired outside a room where Prime Minister Stephen Harper was speaking.

The attack immediately raised the specter of terrorism, with Canada already on alert because of a deadly hit-and-run earlier in the week against two Canadian soldiers by a man who police say was fired up with radical Muslim fervor.

Witnesses said the soldier was gunned down at point-blank range just before 10 a.m. by a man carrying a rifle and dressed all in black, a scarf over his face. They said the gunman then ran off and entered Parliament, a few hundred yards away, where numerous shots soon rang out. Witnesses said at least 30 shots were fired.

Canadian police are investigating a man named as Michael Zehaf-Bibeau as a possible suspect in the shootings around parliament, a source familiar with the matter said on Wednesday.

The assault came very near the room where Harper was meeting with members of his Conservative party, a government minister said.

“PM [Harper]  was addressing caucus, then a huge boom, followed by rat-a-tat shots. We all scattered. It was clearly right outside our caucus door,” Treasury Board Minister Tony Clement told Reuters.

Police said that an operation was under way to make parliament safe and they were still in the middle of an active investigation.

Dramatic video footage posted by the Globe and Mail newspaper showed police with guns drawn inside the main parliament building. At least a dozen loud bangs can be heard on the clip, echoing through the hallway.

“All the details are not in, but the sergeant-at-arms, a former Mountie, is the one that engaged the gunman, or one of them at least, and stopped this,” Fantino said.

Canada said on Tuesday it had raised the national terrorism threat level to medium from low because of a rise in “general chatter” from radical groups such as Islamic State and al-Qaida but said there had not been a specific threat.

No group, Islamic or otherwise, claimed responsibility for either the attack in Ottawa or the one near Montreal. Monday’s attacker, 25-year-old Martin Rouleau, who converted to Islam last year, was among 90 people being tracked on suspicion of taking part in terrorist activities abroad or planning to do so.

In the hours after Wednesday’s attack, police warned people in downtown Ottawa to stay away from windows and rooftops.

Scott Walsh, a construction worker who was in a manhole in front of Parliament Hill, said he heard the shots at the war memorial.

“We’re in construction and we’re used to loud bangs. When people started screaming and running, that’s when I clued, and I saw this guy running” with a gun, he said. “It was intense. I didn’t think it was real.

In Washington, President Barack Obama condemned the shootings as “outrageous,” and in a telephone call with the prime minister, offered U.S. help and reassurance of the American people’s solidarity with Canada.

The U.S. Embassy in Ottawa was locked down as a precaution, and security was tightened at the Tomb of the Unknown Soldier at Arlington National Cemetery just outside Washington.