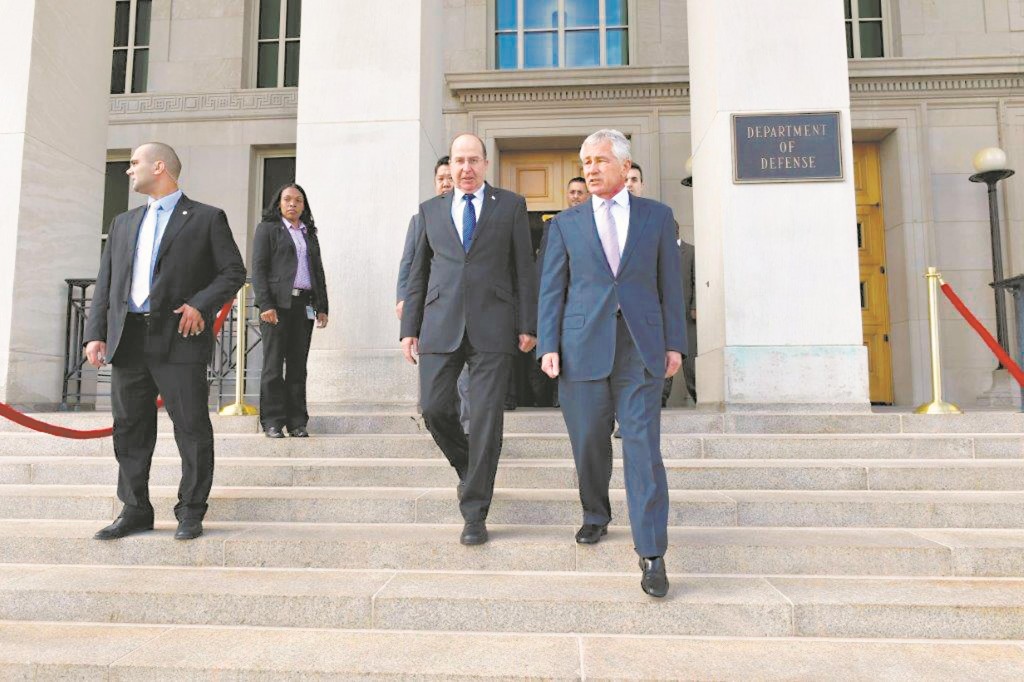 Defense Minister Moshe Yaalon met Tuesday night with American Defense Secretary Chuck Hagel. During their meeting, the two discussed regional strategic issues, among them Iran, ISIS, Syria, the ramifications of Operation Protective Edge and the continued ties between the security establishments of Israel and the United States. As soon as the meeting was over, Yaalon attended an official ceremony at Arlington National Cemetery.

During the meeting, Yaalon told Hagel that “the United States and Israel are true friends, and the ties between them are based on joint values and interests. The United States has stood throughout the years, and now, alongside Israel, and we in Israel see this friendship as a strategic asset of the first degree for us.

“It’s important for me to thank you, the Defense Department and the administration for the assistance in developing the Iron Dome system. Throughout the recent military operation, this system proved itself to be effective, and helped us save lives and manage the operation. Now, you are helping us develop other active defense systems.

“Even if there are disputes between Israel and the United States, they must not mar this deep friendship and the warm ties between the countries. Israel does not have a bigger friend than the United States, and there are few who recognize the depth and importance of this connection like I do. There is unprecedented cooperation between the defense establishment, between me and you, and between the armies, led by General Dempsey and Chief of General Staff Gantz, and the contribution of the American nation to the security of Israel is extensive. Therefore, in the name of the state of Israel and its citizens I would like to tell you thank you for standing with us.

“The Iranian threat remains the most significant one. We are following the negotiations with Iran, and it’s important that they include subjects such as continued enrichment and terror activity. The Iranian regime disseminates terror all over the Middle East, and undermines Western interests and governments, arms Hizbullah and transmits knowledge and money to Palestinian terror organizations in the Gaza Strip.

“ISIS is a threat to the stability of the region, and we have to strive to strengthen the moderate forces in the Middle East who are fighting against it. We can stop them, but it is a long process that will take time.

“Assad controls one quarter of Syria, and the rest of the country is divided among different tribes and forces. There will be chronic instability there.

“Turkey is playing a cynical game. Hamas is being supported by Turkey and Qatar. Hamas has two terror headquarters, in Gaza and in Istanbul. Hamas moved its headquarters from Damascus to Istanbul, Turkey, which is a member of NATO, and is represented there by Salah Aruri, who coordinates terror against Israel from there, and who tried to stage a coup against Abu Mazen in Yehudah and Shomron.”