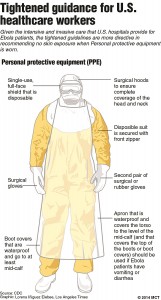 Manufacturers and distributors of impermeable gowns and full-body suits meant to protect medical workers from Ebola are scrambling to keep up with a surge of new orders from U.S. hospitals, with at least one doubling its staff and still facing a weeks-long backlog. Many hospitals say they already have the proper equipment in place but are ordering more supplies to prepare for a possible new case of Ebola.

This gear is made of material that does not absorb fluids and is crucial to preventing the spread of the virus, which has infected thousands across West Africa, many of whom caught the disease while caring for those infected. Ebola is transmitted through direct contact via cuts or mucous membranes, and proper protective equipment helps prevent doctors and nurses from accidentally getting any fluids in their eyes, nose or mouth.

Hospitals are paying close attention to the type of protective gear they stock after two nurses contracted Ebola earlier this month while caring for a Liberian man dying of the disease at a Dallas hospital.

The CDC announced new guidelines Monday night calling in part for health workers caring for Ebola patients to wear face shields, hoods, boot covers and other garb that leave no part of the body exposed.

Tahe nation’s largest hospital chain, HCA Holdings Inc., has stocked its hospitals with routine protective equipment like impervious gowns and leg and shoe coverings. It also bought respirators for its medical personnel when the H1N1 flu outbreak hit in 2009, and it has been updating that stockpile, said chief medical officer Dr. Jonathan Perlin.

The hospital chain also has stockpiles of hazardous-materials suits and hoods that it can distribute to its hospitals as needed, but it needs to obtain more to have a “completely sufficient” number, spokesman Ed Fishbough said.

HCA runs more than 160 hospitals in 20 states and England. Its hospitals have yet to treat an Ebola patient, but its staff would be required to wear that protective clothing, plus a double layer of gloves and the respirator, when dealing with any Ebola patients.

This article appeared in print on page 8 of the October 22nd, 2014 edition of Hamodia.