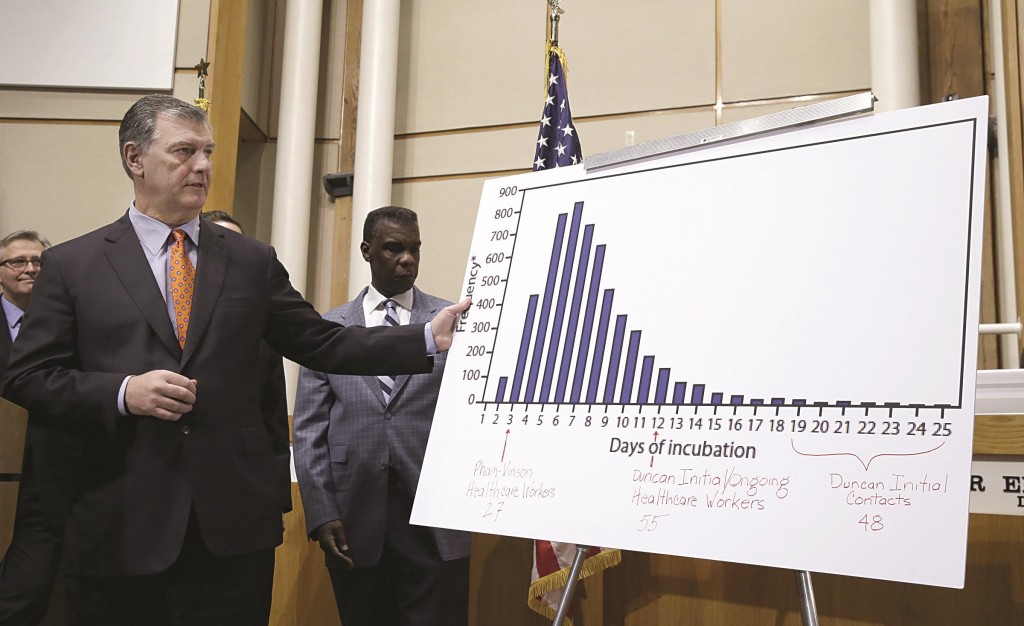 Dallas County officials on Monday expressed relief with the end of Ebola monitoring for most of the first group of 48 people who had contact with Thomas Eric Duncan, who died of the virus on Oct. 8.

“Today is a milestone day, it’s a hurdle that we need to get over,” Mayor Mike Rawlings said at a morning briefing.

Duncan, 42, was admitted to Texas Health Presbyterian Hospital in Dallas on Sept. 28, and the group began their 21-day monitoring soon after, including daily visits from public health workers who took their temperatures daily and checked for other symptoms of the deadly virus.

Two nurses have since been diagnosed — Nina Pham, 26, and Amber Vinson, 29 — but no one else in the group showed any symptoms, officials said.

As of midnight Sunday, 43 of the 48 original contacts were “Ebola-free,” according to Dallas County Judge Clay Jenkins.

“The time period for them to get Ebola has lapsed; it is over,” Jenkins said.

One more person in the ambulance used to take Duncan to the hospital was expected to be cleared late Monday, Jenkins said.

Four additional people, all health care workers who saw Duncan the day he was admitted to the hospital and afterward, were expected to be cleared in the next few days, he said.

An additional 120 people in Dallas will continue to be monitored for Ebola symptoms, with the last removed from monitoring on Nov. 7, which Rawlings called “the magic date.”

State health commissioner David Lakey released a statement noting, “Epidemiologists have worked around the clock to call and visit people who may have had any exposure, to make sure they were asymptotic and doing well … I’m happy we can tell people they are free and clear of monitoring. It provides a measure of relief and reassurance.”