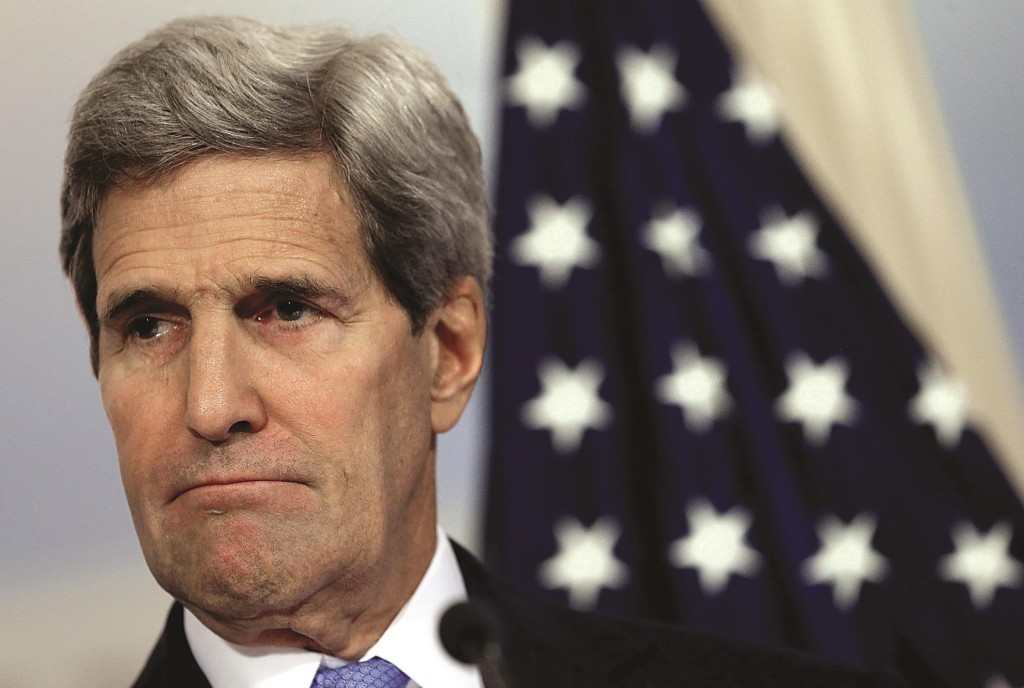 Secretary of State John Kerry and Israeli officials were at odds again as the top American diplomat sought a re-entry into Mideast peacemaking several months after Israeli-Palestinian talks collapsed in a cloud of recriminations.

During remarks at a White House ceremony for the Muslim festival of Eid al-Adha on Thursday, Kerry said:

“I think that it is more critical than ever that we be fighting for peace, and I think it is more necessary than ever… As I went around and met with people in the course of our discussions about the ISIL (Islamic State) coalition, the truth is we — there wasn’t a leader I met with in the region who didn’t raise with me spontaneously the need to try to get peace between Israel and the Palestinians, because it was a cause of recruitment and of street anger and agitation that they felt,” Kerry said.

Kerry was criticized by Economic Minister Naftali Bennett for linking the emergence of Islamic State with the failed peace process.

But the State Department on Friday rejected Bennett’s interpretation of Kerry’s words. Deputy spokesperson Marie Harf maintained that Kerry’s remarks were taken out of context “for political reasons.”

“[Kerry] did not make a link between the growth of ISIL and Israel, period,” she said.

This was “nothing new,” the spokeswoman continued, adding that either the minister didn’t read what Kerry said or someone was distorting the facts. “That was a wrong reading of his comments,” she concluded.

While the Prime Minister’s Office made no response to the remarks, Communications Minister Gilad Erdan (Likud) said that Kerry had outdone himself in showing a lack of understanding of the Middle East. Erdan may have been speaking as a proxy for Israeli Prime Minister Binyamin Netanyahu, according to Haaretz.

As noted by one Israeli commentator on Sunday, “Kerry didn’t mention that the astounding Saudi and Qatari assets invested in mosques around the world, including Europe, leads to radicalization. He didn’t come out against Qatar, which has become the primary funder of jihadi organizations. He doesn’t blame the institutionalized anti-Semitic incitement, which is growing in the Muslim world, including by Al-Jazeera. He certainly doesn’t blame the U.S. itself, whose actions in Afghanistan and Iraq have led to the deaths of hundreds of thousands of people, most of whom are innocent. This man repeatedly recites unfounded statements which serve the radical propaganda, which is generally anti-Western as well.”