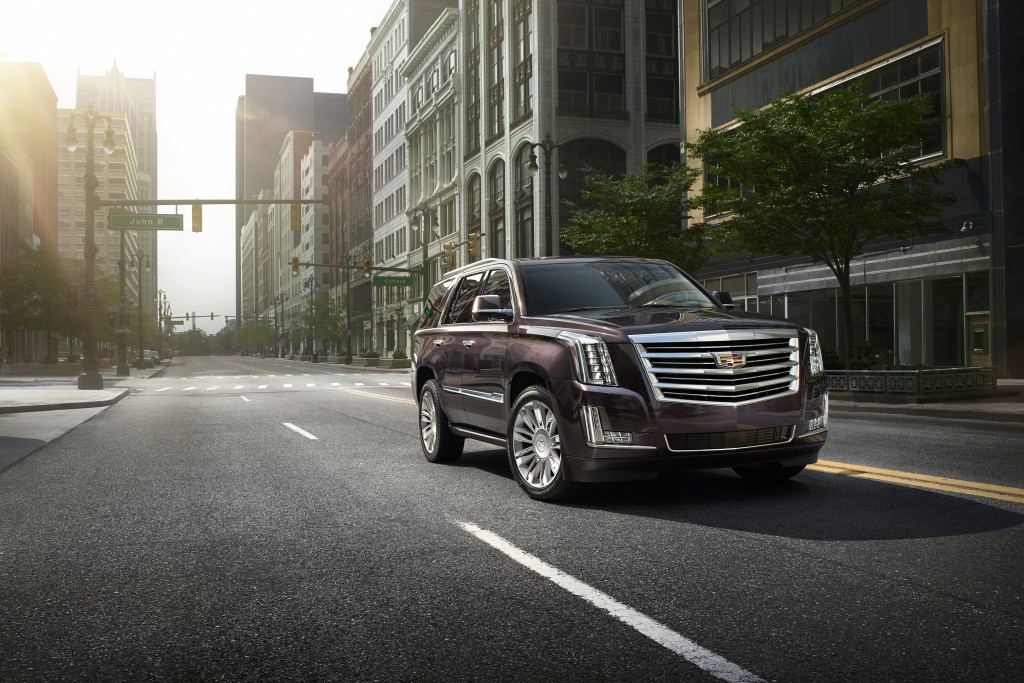 At first glance, it looked as if it had spent the last year at some tightly laced military school.

All of its loose lines had been pressed flat for 2015, and those awful fake vents in the front fenders got plucked out like bad earrings.

Still, you won’t have any trouble recognizing it.

An enormous five-bar grille stretched across the full width of the one I had recently, squeezed slightly by slender, extremely vertical headlamps.

A long, almost flat hood and tightly cut slab sides added to the, uh, boxy new look, as did a square top and hatchback.

Character lines as straight as John McCain sailed cleanly down the sides, complemented nicely by old-school 2-inch chrome strips down low on the doors.

About the wildest elements on the new body were seriously vertical taillamps that started at the base of the rear fenders and ran all the way to the top of the hatchback.

Initially, I feared the Arlington, Texas-built Escalade had gone kind of conservative on me. But now I think Caddy just dressed it in a more expensive suit.

If you look closely at mine, you’ll notice seven-spoke, 22-inch wheels wrapped in 285/45 tires — sort of the automotive equivalent of gold shoes.

Refinement, however, really does define the Escalade’s new interior, giving the $88,000 SUV a much higher-end feel than its predecessors.

The interior in the Escalade I had almost looked Audi-esque with its rich mix of black and baseball-mitt brown.

Its black padded dashboard, for example, offered graceful, soft-to-the-touch curves that wrapped over the instrument panel and giant center stack.

Meanwhile, the seats looked almost sumptuous, with elegant stitching on their edges.

As you might expect in a truck-based, three-ton SUV, the legroom and headroom in back were limo-like.

But the Escalade was also equipped with third-row seats that now fold up and down automatically at the touch of a button.

The second row of seats in my Premium model were buckets like those in the front, making it relatively easy to reach the little bench in back that comprises third-row seating.

Save it for people you don’t like. If you can see over most countertops, the only way to get comfortable back there is to sit in the middle with your legs extended between the second-row buckets.

Still, I direct my biggest complaint at Cadillac’s controversial CUE system, which uses iPad-style touch strips to adjust the climate-control and audio systems.

Thanks to those dopey strips — over which you are supposed to slide your fingers to raise or lower various levels — you are virtually guaranteed to get at least one full blast of the stereo and climate-control system daily.

Caddy also rates a small ding for the unimaginative gray headliner in an otherwise fine interior.

Borrowed from the 2014 Corvette — and detuned some — the direct-injected, high-compression engine produces 420 horsepower and 460 pound-feet of torque.

Dip deeply into the throttle, and the smooth, torque-happy V-8 responds instantly with a great, muted hot-rod growl.

Stay on it, and the giant Caddy will romp improbably to 60 in a little less than six seconds, according to Car and Driver.

Count on guzzling a gallon of gas at least every 21 miles on the highway and downing a big shot every 14 miles in town. (Get your broker to add some energy stocks to your portfolio, and you should be fine with it.)

The engine was tied to a six-speed automatic that mostly delivered smooth, adequate shifts but could get confused, sometimes dropping down to a lower gear than the engine needed. (At some point, presumably, GM will make its new eight-speed automatic available in the Escalade.)

My Escalade would have felt even more lively if it hadn’t been equipped with four-wheel drive, an option I suggest you avoid unless you own a ranch or regularly cut across golf courses.

The additional 300 pounds of weight from the extra axle, driveshaft and transfer case are just enough to sap some of the Escalade’s lusty performance.

They also make the ride just stiff enough to frequently remind you that the sharp-dressed Escalade still rolls on a basic — sometimes bouncy — pickup-truck platform.

Thankfully, GM is becoming one of the best in the auto industry at tuning electric power steering units, so it’s easy to point the Slade toward smoother paths.

With its slightly hefty weighting, the steering fits the bulked-up Escalade nicely. Quick and linear with commendable road feel, it makes the big SUV reasonably easy to drive in heavy traffic.

As good as it is, though, the 2015 Escalade is one of the last truck-based, body-on-frame SUVs left in the luxury segment.

If you have towing needs and like tough guys in tuxedos, you might consider the Escalade before it gets further refined into a big car-based crossover.