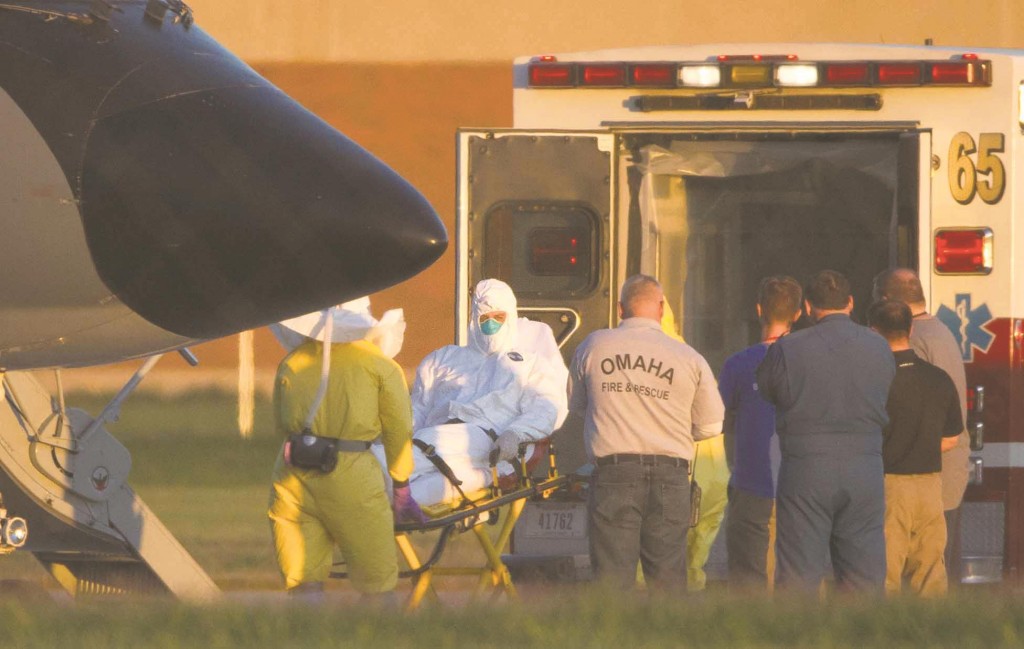 An American video journalist who contracted Ebola while working in Liberia stepped off a jet Monday under his own power on his way to a Nebraska hospital where he will be treated for the disease in a specialized containment unit.

Ashoka Mukpo, 33, was then loaded onto a stretcher for the ambulance ride to the Nebraska Medical Center.

Mukpo was working as a freelance cameraman for NBC News when he became ill last week. He is the fifth American with Ebola to return to the U.S. for treatment during the latest outbreak, which the World Health Organization estimates has killed more than 3,400 people.

Mukpo’s parents said they tried to talk him out of going to Liberia last month, but he told them he wanted to help show the severity of the epidemic.

“I begged him from a mother’s perspective, I said please don’t go,” Diana Mukpo said. “But there was nothing to do. He was determined.”

Before returning to Liberia last month, Mukpo had lived there for two years while working as a researcher for the Sustainable Development Institute, a nonprofit focused on the concerns of workers in mining camps outside Monrovia. He only returned home to Providence, Rhode Island, in May.

It’s not clear how Mukpo became infected, but Levy said it may have happened when he helped clean a vehicle someone died in.

During his treatment, his parents will have to rely on a video chat system in his hospital room to communicate with him.

In Dallas, a man who recently traveled to the U.S. from Liberia was listed in critical condition. Thomas Eric Duncan has been hospitalized at Texas Health Presbyterian Hospital since Sept. 28.

Dr. Tom Frieden, the CDC’s director, said he was aware that Duncan’s health had “taken a turn for the worse,” but he declined to elaborate.

Officials are monitoring the health of nearly 50 people who had varying degrees of contact with Duncan.

The virus that causes Ebola is not airborne and can only be spread through direct contact with the bodily fluids of an infected person who is showing symptoms.