National Kids Get New Hands Made With 3-D Printers
National 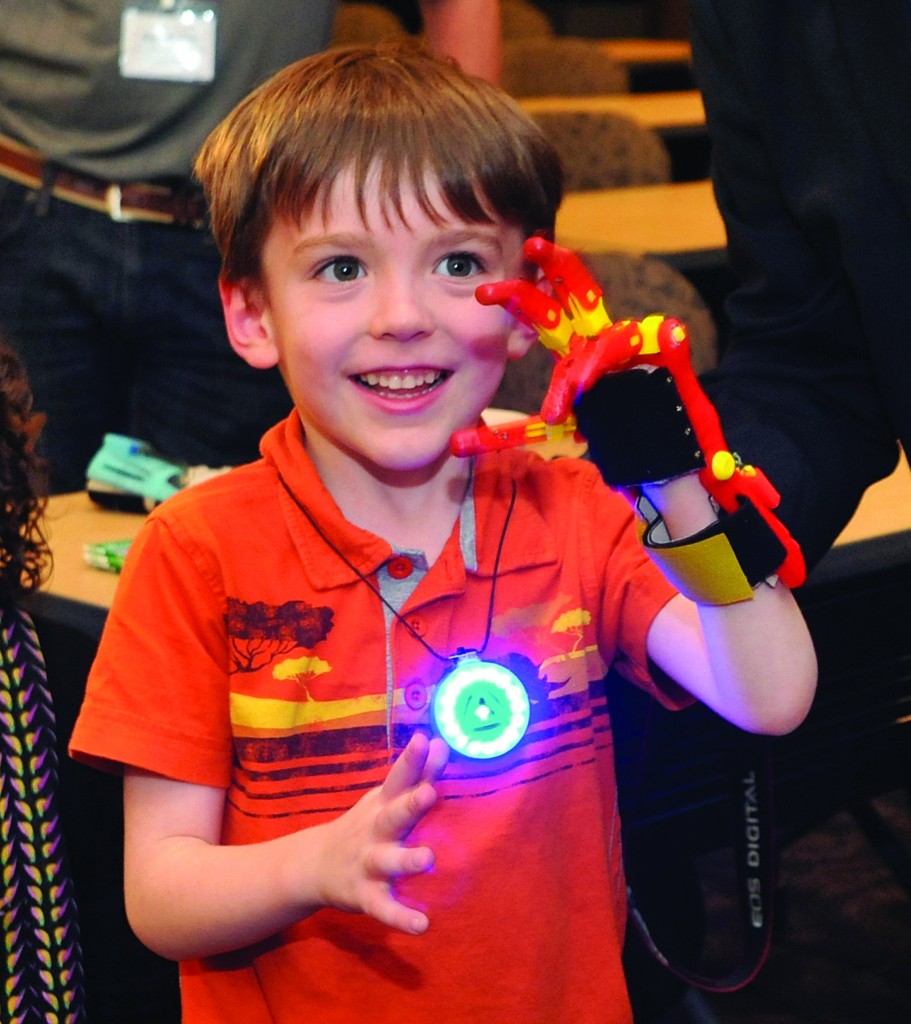 Trauma surgeon Albert Chi gave a talk last year to families about advanced prosthetics that would someday benefit their children who were missing hands.

But when a parent asked what was easy, available and affordable now, Chi was stumped. After focusing on the latest artificial limb technology, he began to hunt for more basic options.

Like many researchers, entrepreneurs and even artists in recent years, he turned to the 3-D printer. With one his wife bought him for Father’s Day, sheets of colored plastic, and free designs and advice found online, he made a hand for about $20.

“One of the first kids we fitted was a 2-year-old,” Chi said. “We thought the child was too young, but we weren’t even able to finish strapping it on, and the kid was picking an object up.”

The need for such prosthetics has spawned a network of volunteer designers, medical workers, artists, engineers, parents and 3-D print enthusiasts who have been outfitting children with prosthetics — some with lower-end machines that cost less than $1,000.

That network is hoping to give hands — free of charge — to any interested child. It includes the nonprofit e-NABLE, the largest and perhaps only organization matching kids with printers.

The organization has provided more than 400 kids with printed prosthetics over the past year. In addition, with designs that are free on the e-NABLE’s website, families may be printing their own.

The 3-D printed prosthetics are particularly useful for children. They often grow out of prosthetics and can’t afford replacements every few months or years. The 3-D versions also can be lighter and easier to wield — and come in their favorite colors.

The U.S. Centers for Disease Control and Prevention reports that four in 10,000 children are born with some congenital hand loss, or about 1,500 a year. That doesn’t include those who lose their hands in accidents.

Insurance also doesn’t always cover pediatric prosthetics, which cost up to $40,000, said Chi. And children can have trouble adjusting to them.

Griffin Matuszek, who was born without part of his left hand, found his traditional prosthetic mostly useless and a bit scary, said his mother, Quinn Cassidy. So she began researching alternatives.

When someone sent the family a link to Chi’s work on 3-D hands, Cassidy’s father called the doctor. Griffin’s family came from North Bethesda, Md., to Baltimore to get his first printed hand. The 5-year-old requested one that glowed in the dark.

Cassidy said Griffin was drawn to his new hand because he could put it on himself and easily manipulate it with his palm muscles. The traditional prosthetic was tight and covered his forearm.

“He put it on and immediately gave Dr. Chi a high five and then gave everyone in the room a high five,” Cassidy said. “He was able to pick up a small ball and throw it with his left hand right away.”

Cassidy said the hand made Griffin happy and more confident, and didn’t break her bank. The old prosthetic was covered by insurance, but her co-pay was $1,000. She was so grateful to Chi that she pledged to cover the cost of a 3-D printed hand for another child every time Griffin got a new one.

The printers work like glue guns, as plastic sheets are fed into the machines and melted. The plastic comes out in layers that eventually look like Lego pieces, fitted together with plastic bolts that also are printed.

Hand parts take up to 10 hours to print and another couple of hours to assemble with elastic cords to keep the hands open. Kids make them grasp by flexing their palms or wrists. Extra cords can be used to strap them on kids with more extensive limb loss.

Chi, a trauma surgeon at Johns Hopkins Hospital, called the effort a “labor of love.”