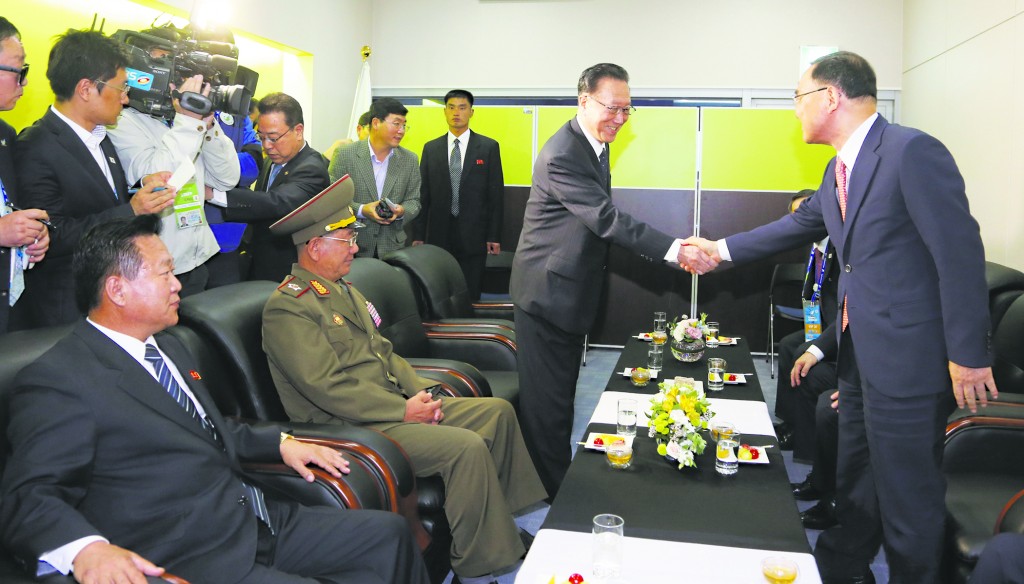 North Korea’s presumptive No. 2 and other members of Pyongyang’s inner circle met with South Korean officials Saturday in the rivals’ highest level face-to-face talks in five years, a possible indication that both sides are interested in pursuing better ties after months of animosity.

There appeared to be no major breakthrough from the meeting that came as the North’s delegation made a surprise visit to the close of the Asian Games in the South Korean port city of Incheon. But the countries agreed to hold another round of talks between the end of October and the beginning of November, according to a South Korean statement. The specific topics of Saturday’s discussions weren’t immediately known.

Still, just the fact that North Koreans at the highest levels visited the South was significant, allowing valuable contact between confidants of North Korea’s authoritarian leader and senior South Korean officials after a year that has seen a steady stream of insults between the divided neighbors and an unusual number of North Korean missile and rocket test firings.

One analyst called it a “golden opportunity” for South Korean President Park Geun-hye to test North Korea’s willingness to improve shaky ties. The South Korean statement said Park had been willing to meet with the Pyongyang officials, but the North Koreans were running out of time because they had to attend the Asian Games’ closing ceremonies. South Korea said its prime minister, largely a figurehead but technically the No. 2 position, met with the delegation later Saturday before the North Koreans left South Korea late in the evening to return home.

The North Koreans were led by Hwang Pyong So, the top political officer for the Korean People’s Army and considered by outside analysts to be North Korea’s second most important official after supreme leader Kim Jong Un. Hwang is also a vice chairman of the powerful National Defense Commission and a vice marshal of the army.

The visit comes amid rumors in Seoul about the health of Kim Jong Un, who has made no public appearances since Sept. 3 and skipped a high-profile recent event he usually attends. A recent official documentary showed footage from August of him limping and overweight and mentioned he had been feeling “discomfort.”

This visit of “a very high-octane group” offers Park a unique chance “to test the North Korean leadership’s will and intentions,” said John Delury, an Asia specialist at Seoul’s Yonsei University. “Historically, North-South breakthroughs start from the top down, and if Park is serious that she wants to improve relations and jumpstart the reunification process, this is a golden opportunity.”

U.N. Secretary-General Ban Ki-moon welcomed the talks and was encouraged that both sides agreed to hold more talks later, a statement from his office said.

Both sides expressed hope for better relations in comments to the media ahead of the private meeting.

High-level North Korean visits to South Korea have been scarce since Park’s conservative predecessor, Lee Myung-bak, took office in early 2008 with a tough line on the North. Attacks blamed on North Korea in 2010 killed 50 South Koreans.

Senior officials from the rival Koreas — lower-level than those who met Saturday — met at a border village in February for talks that dealt with key inter-Korean issues such as South Korea-U.S. military drills and the resumption of reunions of Korean War-divided families. In August, South Korea proposed another round of talks to discuss about the family reunions.

Specific topics for the next round of talks, which will follow up on meetings on Saturday and in February, are not known, South Korean officials said.