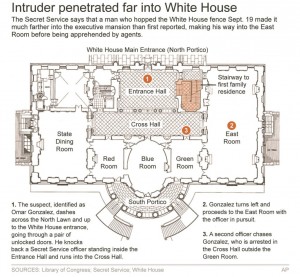 The head of the Secret Service took responsibility Tuesday for the Sept. 19 security breach at the White House, when a man with a pocketknife scaled a fence and ran deep into the White House before he was stopped.

“This is unacceptable and I take full responsibility … and will make sure that it doesn’t happen again,” Secret Service Director Julia Pierson told lawmakers, who went on to grill her about how and why the agency failed to stop the intruder, and why alarms did not work as intended.

Pierson promised a follow-up investigation and a review of White House security policies, and acknowledged that the recent security lapse “did not occur in a vacuum,” referring to the series of mishaps and scandals that have plagued the agency under President Obama.

During the breach on Sept. 19, authorities say, Omar Gonzalez, 42, of Copperas Cove, Texas, climbed over the wrought-iron fence that surrounds the White House, ran across the lawn and dashed through the unlocked front door.

White House officials initially had said Gonzalez was stopped as soon as he got inside. But a federal law enforcement official confirmed Monday that Gonzalez pushed past a guard at the front door and made it about 100 feet inside, past stairs leading to the Obama family quarters, before he was tackled.

Pierson also revealed Tuesday that Gonzalez knocked back an agent at the front door who was trying to lock it. The two wrestled through the hallway leading to the East Room, where another agent finally tackled Gonzalez.

At that time, Pierson said, the front door was not equipped with an automated locking mechanism and had to be locked by hand. Automatic locks have since been installed, she said.

Gonzalez was carrying a 3-inch serrated knife in his front pocket, according to a Secret Service affidavit filed after his arrest.

The case is the latest blow to the Secret Service under Obama.

In 2009, a pair of uninvited guests managed to attend an official state dinner hosted for the Indian prime minister. In 2011, Secret Service officials took five days to confirm that a gunman had fired multiple shots at the White House from his car, according to a recent Washington Post report.

Representatives from both parties pressed Pierson on prior law enforcement contacts with Gonzalez, including an arrest in Virginia in July for reckless driving, in which police found 11 weapons and a map of Washington with lines indicating the White House. He was released on bond.

“I hate to even imagine what Gonzalez would have done if he had burst into the White House with a gun rather than a knife,” said Rep. Elijah Cummings of Maryland, the ranking Democrat on the committee.

Pierson defended the Secret Service’s handling of that case, saying it was a sightseeing map and Gonzalez did not then show signs of mental illness.

This article appeared in print on page 6 of the October 1st, 2014 edition of Hamodia.