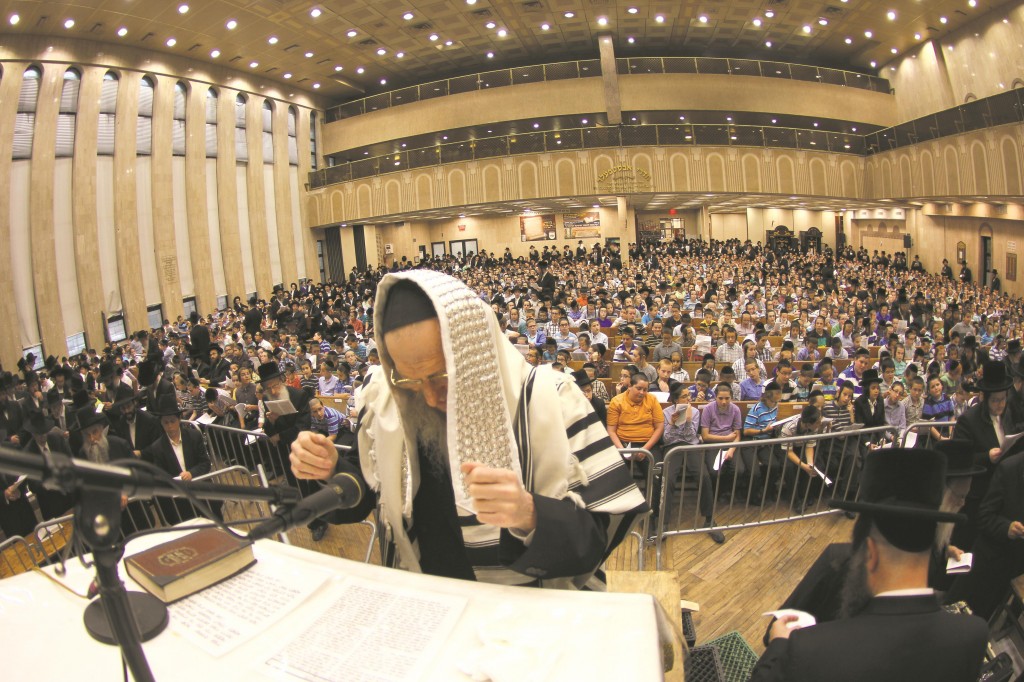 An abundance of hisorerus was generated Tuesday at the 21st annual Asifas Tehillim Haolami in Boro Park. The massive gathering, which brings together yeshivah children for tefillah and Tehillim on behalf of the ill, the needy and all those suffering adversity in Klal Yisrael, took place at the Bobover beis medrash on 15th Avenue and 48th Street.

The gathering, held each year during Aseres Yemei Teshuvah, is coordinated by Misaskim, which has an outstanding record in providing support and assistance to those confronting crisis or tragedy, R”l, with compassion and professionalism.

The enormous shul accommodated children from dozens of yeshivos who represented a number of local communities. This created an atmosphere of achdus of Klal Yisrael and surely fortified the tefillos. The children were additionally inspired by the presence of numerous Admorim, Roshei Yeshivah and Rabbanim, shlita.

It was an incredible scene: A vast crowd of tinokos shel beis rabban united in earnest tefillah entreating the Borei Olam for Heavenly compassion in these challenging times. These tefillos and bakashos emanating from the pure unsullied neshamos, we pray, had a tremendous impact in Shamayim and served to produce much-needed zechuyos for Klal Yisrael.

The annual event took on special meaning in view of the tragic events that took place in Eretz Yisrael this past summer, the economic crisis that has affected countless families, Yidden in prison and the many other physical and spiritual challenges confronting Klal Yisrael.

An audio hook-up connected the asifah to about 130 communities worldwide. In the past, it has included the participation of yeshivah children in U.S. cities such as Baltimore, Cleveland, Chicago, Dallas, Memphis, and Milwaukee, as well as locations in the states of California, Connecticut, Indiana, Florida, Georgia, Massachusetts, Michigan, Minnesota, Missouri, Pennsylvania and Rhode Island. Internationally, it has included Montreal and Toronto; communities in London, Manchester and Gateshead; Mexico City; locations in Holland; and sites in Argentina, Chile, Colombia, Costa Rica, Panama and Venezuela. Many others participated remotely by following the event on the Kol Mevaser telephone line and online, allowing them to recite Tehillim wherever they were. Consequently, tens of thousands of children in various places davened and recited Tehillim simultaneously in order to merit refuos and yeshuos for Klal Yisrael.

A large display in the beis medrash listed the names of cholim that were sent in to be included in the tefillos.

This most recent Asifas Tehillim Haolami provided abundant hisorerus and inspiration to all who participated and will hopefully bring many yeshuos to Klal Yisrael.