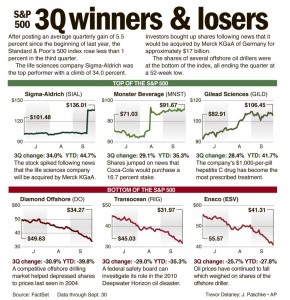 A suddenly stormy month on the stock market came to a quiet end on Tuesday. Major indexes drifted to a slight loss, leaving the Standard & Poor’s 500 down 1.6 percent for September, its third monthly drop this year.

The market spent Tuesday wavering between minor gains and losses, but there were big moves beneath the surface. Crude oil prices plunged, dragging down Chevron and other oil and gas companies. Ford Motor fell after cutting its profit forecast, while eBay jumped after announcing plans to spin off PayPal.

Despite its bad reputation, September has actually been mostly good to investors. Before this year, the S&P 500 turned in a September loss just twice over the past decade: during the financial crisis in 2008 and again following a fight over raising the government’s borrowing limit in 2011.

This month looked to be different. The S&P 500, the main benchmark for mutual funds, reached a record high on Sept. 18, supported by news of stronger economic growth in the U.S. and reassuring words from Federal Reserve officials about keeping interest rates low. Turbulence hit the following week as investors began questioning whether the stock market was overpriced. Some warned that the market had been calm for too long.

EBay jumped 8 percent on Tuesday, the biggest gain in the S&P 500, following news that it plans to spin off its PayPal payment service into a publicly traded company next year. Ebay jumped $3.97 to $56.63.

Benchmark U.S. crude plunged $3.41, or 3.6 percent, to settle at $91.16. More evidence of plentiful supplies have pushed prices down. Oil has also been dropping as the value of the U.S. dollar rises against other currencies.

Pro-democracy protests continued in Hong Kong, a major world financial hub. Thousands of peopled blocked streets in the business district and surrounding streets. They want the Chinese government to allow open elections for Hong Kong’s top office, whereas Beijing wants candidates to be vetted by a panel dominated by supporters of the mainland government.

Hong Kong’s Hang Seng Index tumbled 1.3 percent. Tokyo’s Nikkei 225 was down as much as 1.5 percent before ending the day with a loss of 0.8 percent. China’s Shanghai Composite Index added 0.3 percent.

In Europe, a new batch of economic reports furthered speculation that the European Central Bank might provide more support for the region’s economy. The annual inflation rate dropped to 0.3 percent, the weakest rate since October 2009. The report added pressure on the ECB to start a more aggressive stimulus program through large-scale purchases of bonds.

Back in the U.S., Ford’s stock fell after an executive said late Monday that the car maker will fall short of its earnings targets this year. Bob Shanks, Ford’s chief financial officer, said record profits in North America aren’t enough to offset trouble in South America, where Ford expects to lose $1 billion this year, and Russia, where falling sales and a steep fall in the ruble took the company by surprise. Ford fell 32 cents, or 2 percent, to $14.79.

In other trading, U.S. government bond prices headed lower. That nudged the yield up on the 10-year Treasury note to 2.50 percent from 2.48 percent late Monday. Bond prices and their yields move in opposite directions.

In other energy trading, Brent crude, a benchmark for many international oils imported by U.S. refiners, dropped $2.53, or 2.6 percent, to $94.67 a barrel in London.