Israel Netanyahu Seals Off Path to Negotiations With Abbas, Puts Allies in a Corner
Israel 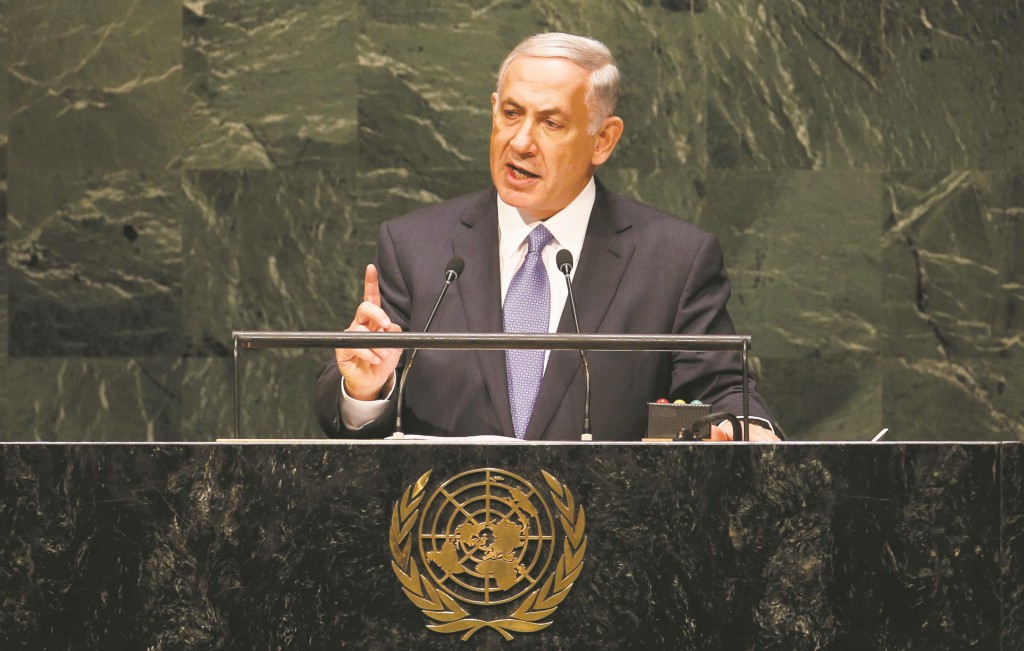 Prime Minister Netanyahu’s speech last night at the United Nations in New York was one of the best speeches delivered by an Israeli Prime Minister on an international stage. In the 34 minutes that he spoke, Netanyahu pressed numerous countries and personalities, including allies, into a corner. It was a bold speech; he put everything on the table.

Netanyahu hardly mentioned President Obama by name or by title. But he still settled an account with the president for the criticism that he and his senior officials, as well as the other world leaders, leveled at Israel when it defended itself against attacks by Hamas.

“Last week, many of the countries represented here rightly applauded President Obama for leading the effort to confront ISIS. And yet weeks before, some of these same countries — the same countries that now support confronting ISIS — opposed Israel for confronting Hamas. They evidently don’t understand that ISIS and Hamas are branches of the same poisonous tree.”

So why did these countries criticize us, Netanyahu asked, leaving world leaders without an answer.

It was also a speech that heralded the end of the on-and-off negotiations with the Palestinians. Netanyahu did not only minimally mention the American president, he also virtually ignored PA chairman Abu Mazen. But he clearly stated what he wanted them to hear: You want peace? Seek negotiations? Are pressuring for withdrawals? We can talk about all these things. Because Israel knows that ultimately, in true peace, it will have to compromise. But it will not negotiate, or make concessions to anyone who denies the Holocaust and becomes a partner to crimes of a murderous organization that places children at the front of its firing lines.

There was applause in the hall. Because everyone understood which Holocaust denier he was referring to, and with whom the chances of reaching an agreement were being quashed as the prime minister spoke. This man is not a partner for Israel, Netanyahu was saying.

Israel has no partners on its borders, but she sees a chance for opportunities in the broader Arab world. Therefore, it is possible that it will take advantage of the chances that have arisen to open dialogue with Riyadh, Cairo and the Gulf states. And meanwhile, the Palestinians will wait. After changes will take effect in the relations with the Muslim and Arab world, perhaps it will be possible to return to negotiations with the Palestinians, who will be living at the time in Yehudah and Shomron. But not with that someone who leads them today and supports riots, attacks and unrest.

Iran, too, was part of Netanyahu’s speech. And the arrows were aimed at all the powers that are conducting negotiations with Iran, and offering concessions that will bring that country to the nuclear path. And that’s exactly what the Iranians want, that they should be able to get rid of the yoke of the sanctions, and to continue realizing their plans.

And in general, Netanyahu asked, what is the connection between the talks with Iran and the attacks on ISIS? Just because attacks are in progress, does that mean that pressure on Iran can ease? On the contrary: Specifically when acting against terrorists they must remember that Iran is a terror leader, and pressure must be kept up on it.

For anyone who did not understand yet at this point, Netanyahu took out a photo of missiles being fired by Hamas from a playground with children inside the Gaza Strip. He showed the New Yorkers the distance between the border of Yehudah and Shomron and the sea, saying that it’s exactly the distance between the U.N. building in Manhattan to Times Square. And if they would come and set up missiles towards your countries from such a distance, Netanyahu asked world leaders, would you sit passively?

The prime minister also had harsh words for the Human Rights Council of the United Nations and said to them bluntly: You are anti-Semitic. That is your policy and you make your decisions based on that approach.

But Hamas, which put women, children and old people in the line of fire as human shields so they should be harmed — them you praised. And you stood beside them. With such decisions, you, the members of the U.N. Human Rights Council, sent a message to the world: Use civilians as human shields. You gave legitimacy to this act.

It was a well-built speech, with direct messages to specific addresses, and will undoubtedly be effective, even to those who immediately reject the words of the Israeli speaker, no matter who it is. Netanyahu promised to fire back in response to Abu Mazen, and he did.