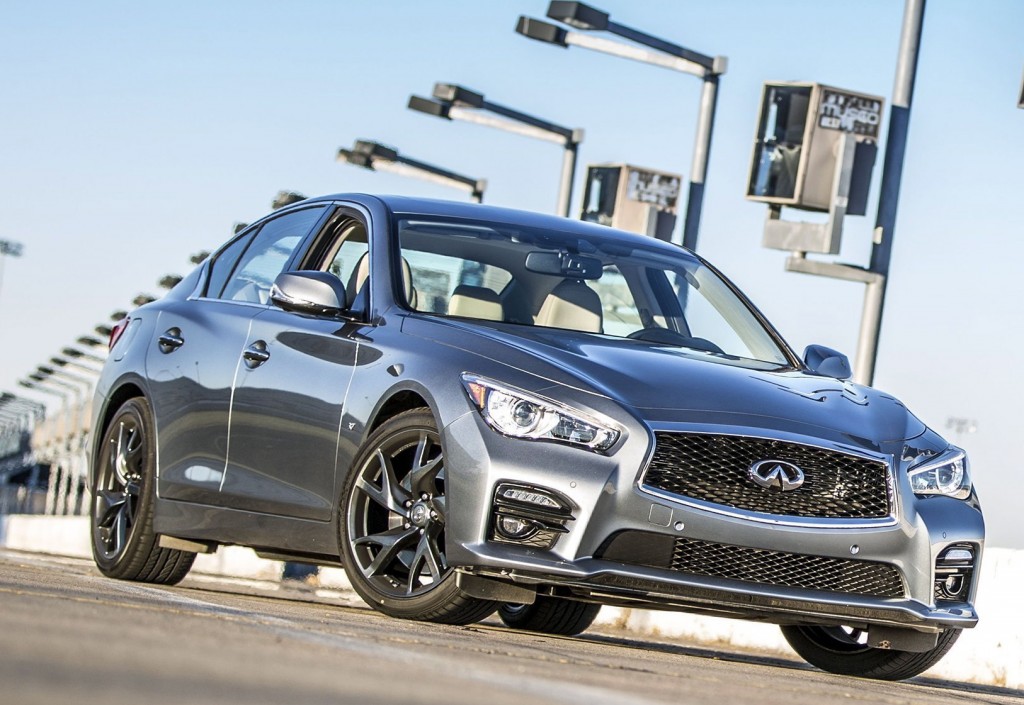 The 2014 Infiniti Q50 S AWD sport sedan delivers spirited performance and sleek looks, but feels half a step out of sync with the luxury market.

While other automakers add small turbocharged four-cylinder engines to their entry-level luxury sedans, the Q50 continues to rely solely on Infiniti’s powerful V6.

The Q50 replaces Infiniti’s G37 before Nissan’s luxury brand changed the names of its vehicles in 2013. It dropped established, if somewhat random, alphanumeric names for a new taxonomy in which cars start with “Q” and trucks with “QX.” The numbers following the letters grow larger as the vehicles’ base prices rise.

Hey, changing names for no apparent reason worked when the parent company went from Datsun to Nissan, right? Not really, but the company’s endearingly Shakespearean conviction that a rose by any other name would smell as sweet has apparently not changed since it threw away Datsun’s decades of brand equity in the 1980s.

Infiniti calls the coupe and convertible versions of the Q50 the Q60. It will sell the previous generation G37 sedan as a base model called the Q40.

The Q50’s V6 engine is among the most powerful in the segment. Its 328 hp tops all competitors except the C400’s identical output. The normally aspirated Infiniti engine’s 269 lb-ft of torque falls short of turbo- or super-charged engines in the Audi, BMW and Mercedes.

The seven-speed transmission is quick and smooth.

The Q50 S AWD’s EPA fuel-economy rating of 19 mpg in the city, 27 highway and 22 combined falls in the middle of its competitive set.

The Q50’s throttle response is strong. The car leaps forward and has the legs for long, fast drives. The chassis is exemplary. The suspension absorbs bumps from poor roads and holds the car level and stable in quick maneuvers. The steering is sharp and responsive.

Infiniti intended the Q50 to be the first production car in which electronic steer-by-wire controls replaced the mechanical connection between the steering wheel and the front tires. The direct adaptive steering system, which Infiniti spent 10 years developing, was plagued by software problems. My test car did not have it.

The Q50 has more passenger and cargo space than its competitors. The front seat feels a bit cramped because of a wide center console and wraparound dash. Rear leg and head room are good. The center stack features two touchscreens for navigation, phone, audio and other controls. It’s an unusual layout that’s slightly simpler to use than some luxury cars with a single screen.

The Q50’s exterior styling is pleasant, but unremarkable. That’s surprising, given the body’s lines and curves, but the visual impact of the whole is a bit less than the sum of its parts.

The Infiniti Q50 S AWD is a pleasant sport sedan whose performance and fuel economy should win shoppers’ attention.