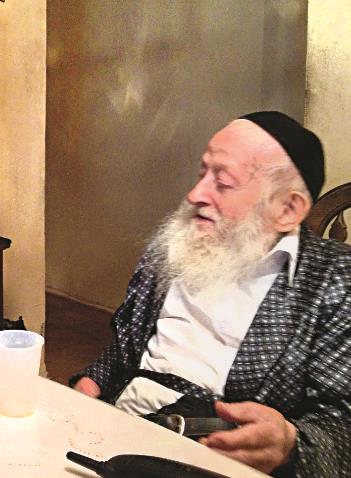 On the morning of Shabbos Shuvah5775, Harav Moshe Pivevoz, zt”l, a beloved talmid chacham, rebbi to many people in the community, and a Gaon in middos tovos, passed away suddenly at the age of 96 — after spending Rosh Hashanah immersed in tefillah at his beloved Tzemach Tzedek shul on the Lower East Side.

On Sunday afternoon the crowd at the levayah poured out from Mesivta Tiferes Yerushalayim onto East Broadway to give kavod achachron to a man, small in physical frame, yet larger than life in his Torah and yir’ah — who shunned the smallest measure of kavod his entire life. True to his character, Reb Moshe forbade hespeidim, and any words that his children said were strictly with the purpose of internalizing the lessons of his life.

Reb Moshe, a fixture on the Lower East Side, was born in the town of Plotnitze, and spent his childhood in Pinsk, near Karlin, then in Poland. He and his family were close to the Rebbe Harav Avraham Elimelech of Karlin, and continued their relationship with the Stoliner Rebbes on these shores.

He attended the Yeshivah Beis Yisroel in Luninetz (in the vicinity of Karlin) which was founded by the Rebbe of Karlin, and where Harav Eliezer Shach, zt”l, served as Rosh Yeshivah for five years.

These are the tremendous tzaddikim in whose glow Reb Moshe spent his formative years, and whose influence he in turn espoused to many throughout the ensuing years, and through whom he was inculcated with the strong love for Torah which stayed with him until his very last day. He shared this very glow with the hundreds who were privileged to know and love him.

After his miraculous escape through Shanghai along with the Mirrer Yeshivah, where he toiled in Torah despite the harsh circumstances, Reb Moshe came to New York. He married, tblc”h, Neta, the daughter of Harav Kalman Avraham Goldberg who was the Rav of Adas Yisrael shul on the Lower East Side, and she supported him in his avodas hakodesh as he taught in Yeshivah Chasam Sofer in Brooklyn, and in the many ensuing years as he toiled in Torah at MTJ like an ordinary kollel yungerman.

His influence on the Lower East Side community was monumental. He would treat all, from the youngest child to the oldest man, with his trademark sweetness and good cheer. So many report being uplifted merely from being in his presence. He truly lifted up all who came in contact with him.

As Harav Reuven Feinstein, Rosh Yeshivah of Staten Island, and the son of Rav Moshe, Rosh Yeshivah of MTJ, told Hamodia tearfully, “I knew him from his years in which he toiled in learning at the yeshivah. He was an acknowledged talmid chacham, but also a great anav, extremely humble. Ehr is gevehn fun di shtile vos haltn oif di velt, he was from the quiet ones who supported the existence of this world.”