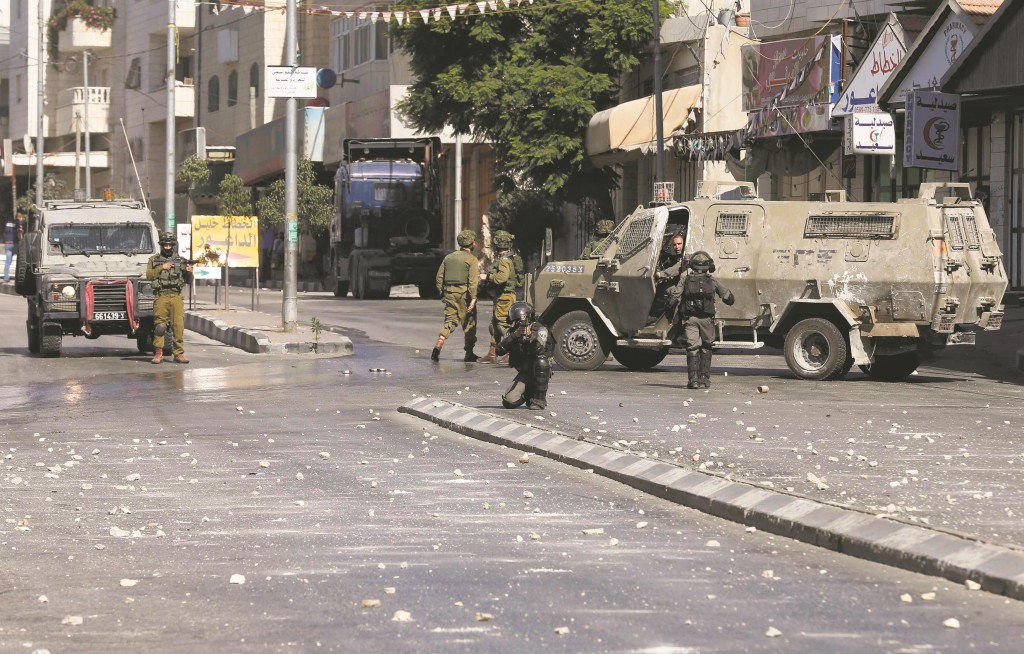 Four months of intensive searching for the kidnappers and murderers of the three boys in Gush Etzion in July came to an end Tuesday morning, when the GSS tracked them down and killed them. Israeli security forces found the place where they were hiding out and, in a swift operation that lasted just several hours, destroyed their house and liquidated the terrorists. The two terrorists, Marwan Saadi Kawasme and Amar Abu Eisheh, were residents of Chevron and were responsible for the kidnapping and killing of Naftali Frankel, Gilad Shaar and Eyal Yifrach, Hy”d.

Late on Monday night, an attempt was made to arrest the perpetrators, but in the ensuing exchange of fire, the terrorists were killed.

Hamodia’s military correspondent notes that Kawasme, 29, is a Hamas operative from Chevron whose family are longtime Hamas members and have a lot of Jewish blood on their hands. Kawasme had been arrested several times in the past for terror activity. His most recent arrest was in 2010, after he was caught being involved in Hamas military infrastructure in Chevron (the same infrastructure unit from which the cell carried out the attack in August of 2010 near Beit Chaggai in which four people were killed.) He was arrested several other times in the last decade for terror activity.

Amar Abu Eisheh, 32, also from Chevron, comes from a family of Hamas operatives. He was imprisoned between 2005 and 2006 because of terror involvement. In recent days, several Hamas operatives suspected of abetting the wanted men were arrested and interrogated by the GSS. Some two months ago, Hassam Kawasme, another Hamas terrorist, was arrested and admitted that he served as the commander of the kidnapping cell, after receiving funding from Hamas in the Gaza Strip.

On Monday night, Bashar Kawasme, Mahmahd Kawasme and Taer Kawasme, all sons of Arafat Kawasme, who has been detained since July 14 on charges of assisting the kidnappers hide after the act, were also arrested. The manhunt for the two murderers did not let up for a single day since the kidnapping. But it all came to an end late Monday night, when the information gleaned from the detainees led the army to the hiding place of the two men, and it was decided to launch the final stage of Operation Shuvu Achim.

It later emerged that only one person knew exactly where the kidnappers actually were, and that is why it was so hard to reach them and the search took so long, despite the extensive efforts by the security forces in Israel. The search was also conducted with great caution, because all information obtained by the GSS included warnings that the terrorists were dangerous and heavily armed, and that they would open fire against anyone who came into proximity with them, which indeed happened.

This meant that the Israeli forces had to tread very cautiously to make sure that there were no casualties on the Israeli side. On Monday night, the IDF dispatched dozens of armored vehicles to Chevron. A large number of forces were deployed in several circles some distance away from the marked house; when the sign was given, the special forces closed in the house from all sides, and those hiding inside had nowhere to run. The Israelis called on the occupants of the house to come out with their hands up.

As expected, no one emerged. At first there was no response, and then the terrorists opened fire. At about 1 a.m., the security forces turned their attention to the weapons cache in the basement of the building, where they believed the men to be hiding. They then began executing what is known as the “pressure cooker” maneuver, in which they begin operating tractors and backhoes, which first claw at the walls, and slowly begin to shake the whole house in an attempt to topple it. After some time, the IDF pulled down the top floor of the building and forged an opening into the roof of the cellar.

The terrorists realized they were trapped and exposed, and came out through this opening and opened fire.

“We began with “pressure cooker” because we realized that they were armed and we had information that they intended to fight, which is exactly what happened,” the brigade commander Tamir Yadai related a few minutes after the operation was over.

One of the wanted men was killed at the site during the exchange of fire. The second one was injured and fell into a pit in the cellar, which is why it was unclear if he had actually died in the initial few hours. They were armed with M16s, Kalachnikovs and pistols. “They came out shooting. One was killed and one fell inside the house,” the commander described. “But we fired back and tossed large bombs inside, and did not leave any possibility that the second kidnapper had remained alive.”

The two bodies were later found at the site. The Chief of General Staff, Benny Ganz, who was closely following the operation, said as soon as it was over, “We promised the Shaar, Yifrach and Frankel families that we would get to their children’s murderers, and this morning, we did just that.”

Defense Minister Moshe Yaalon also congratulated the forces involved in the operation, the IDF, the special police units, and the GSS. “Throughout the searching, they worked with determination, patience and professionalism and, last night, the terrorists got what they deserved. Right after the kidnappings, we promised the families of the boys and the citizens of Israel that we would put our hands on the murders and those who sent them, and with a lot of intelligence efforts and widespread operations, we did that. Everyone who plans attacks against Israelis should know that the State of Israel will not rest and will reach anyone who threatens the welfare and peace of its citizens. There is no salve for the pain and loss of the Frankel, Shaar and Yifrach families, not even at this time, but I hope that the knowledge that their sons’ murderers have been duly punished and will no longer threaten the lives of Israelis will be a comfort to them, even if the slightest one.”