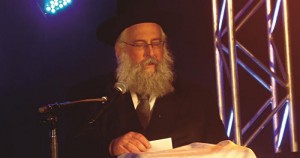 It is with great sadness that we report the passing of Harav Yaakov Bistritz, zt”l, 58, Rosh Yeshivah, Yeshivah Gedolah Mercaz HaTorah of Montreal.

Harav Bistritz was renowned for his especially close bond with his talmidim, exhibiting warm caring and love for each and every one of them.  Last week, even in his severely weakened state, he was carried into the yeshivah to deliver his famed Erev Shabbos mussar shmuess.

This connection was, perhaps, most palpable in the dedication and affection that the bachurim of the yeshivah exhibited for him. Every Shabbos a large crowd of talmidim would accompany their rebbi as he walked from the Yeshivah to his home after davening. On Purim, Harav Bistritz’s house was constantly filled with his students who wanted nothing more than to spend the joyous day with the Rosh Yeshivah.

Despite his prowess as a talmid chacham, and as a proud carrier of the Telsher derech, known for its depth of thought, Harav Bistritz was able to relate to every type of individual, from fellow scholars to the simplest Jew. His shmuessen brought down lofty concepts and made them relevant to today’s bachurim. His shiur was very popular, with many students eager to profit from Harav Bistritz’s outstanding clarity.

He was able to play many roles: delivering the yeshivah’s highest shiur, catering to the simpler needs of maintaining order amongst bachurim, and serving as a respected source of wise advice.

He played a crucial role not only in his yeshivah, but also in the greater Montreal community. Harav Bistritz personally devoted himself to innumerable situations of need. He quietly helped scores of individuals and families with a true sense of ahavas Yisrael.  In several cases, he raised money for bachurim who needed tutors but whose families could not afford the expense. The boys received the help they needed, all while thinking the tutors had been hired by their parents.

Harav Bistritz suffered terribly from his illness over the last few months. Through all this, the simchas hachaim and the acceptance of Hashem’s decree with ahavah that defined his existence became all the more pronounced. Days before his passing, he summoned each of his children to impress on them to accept his petirah, with calmness and love of Hashem.

His loss has left a tragic void in the yeshivah and the community at large.

This article appeared in print on page 4 of the September 24th, 2014 edition of Hamodia.