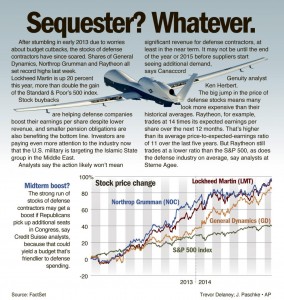 Worries about the outlook for growth in China and a slide in the price of oil pushed the stock market to its biggest loss in almost seven weeks Monday.

Investors are nervous about China, after a run of soft economic data that suggests growth in the world’s second-largest economy is slowing. The worries about China helped push down the price of oil. That, in turn, weighed on energy stocks.

The stock market has struggled to gain traction this month as investors weighed signs of an improving economy in the U.S. against evidence of slowing growth in both Europe and Asia.

The losses were broad, and all 10 industry sectors that make up the S&P 500 declined. Energy stocks were the second-biggest decliners, slumping 1.4 percent as the price of oil fell. Companies that rely the most on consumer spending, such as entertainment and media conglomerates and retailers, fell the most.

The price of oil dropped on concerns that Libya’s production is picking up at a time when global economic indicators point to weaker demand from countries including China. Benchmark U.S. oil fell 89 cents to $91.52 a barrel. Analysts say U.S. oil could test the $90 mark sometime this week.

Smaller companies were also among the biggest decliners as investors shunned the riskier parts of the market.

The Russell 2000, an index which tracks small-company stocks, fell 1.5 percent, more than other indexes. The Russell has dropped 3 percent so far this year, compared with gains of 7.9 percent for the S&P 500 and 3.6 percent for the Dow.

On Monday, stocks were also hurt by a report showed that fewer Americans bought homes in August as investors retreated from real estate and first-time buyers remained scarce.

The National Association of Realtors said sales of existing homes fell 1.8 percent to a seasonally adjusted annual rate of 5.05 million. That followed four months of gains. August sales fell from a July rate of 5.14 million, a figure that was revised slightly downward.

St. Louis-based chemical firm Sigma-Aldrich was among the day’s winners. The company’s stock surged $34.03, or 33.2 percent, to $136.40 after agreeing to be acquired by Merck, a German drug company. Merck is paying $140 a share from Sigma-Aldrich, a premium of 37 percent over Friday’s closing price.

Apple also bucked the slump, logging a small gain of 10 cents, or 0.1 percent, to $101.06. The technology company said that it has sold more than 10 million iPhone 6 and 6 Plus models, a record for a new model, in the three days after the phones went on sale.

Metals remained weak. Silver continued its recent descent, falling to its lowest level since the summer of 2010.