Community Seating the Masses: Arranging a Minyan of Thousands
Community 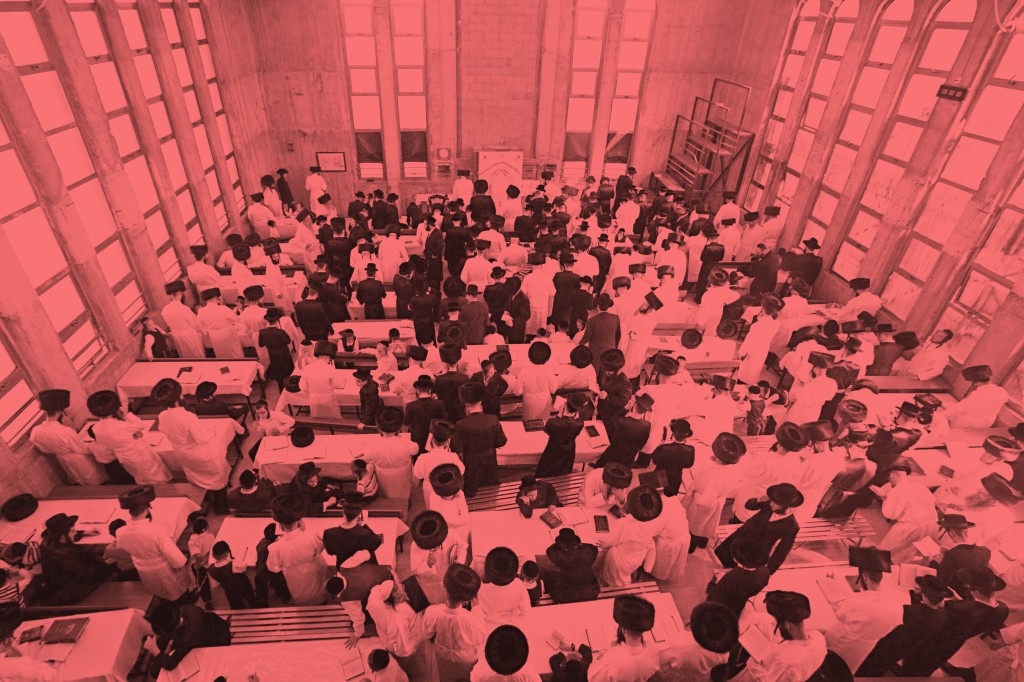 Harav Arele Felshtiner once offered the following explanation of why Chassidim travel to their Rebbes for Rosh Hashanah: Klal Yisrael is like a body, and every individual is one of its limbs. The tzaddik is the rosh, head, and he knows how to take all of the parts and put them into their proper places.

A similar challenge confronts those individuals charged with the task of taking requests and assigning seating for the Yamim Nora’im, particularly if they must accommodate thousands of mispallelim.

A small room on the second floor of Bais Medrash Govoha (BMG), Lakewood, is home to the seating “command center” of America’s largest yeshivah. There, on a long table with several telephones and seven computer screens, the four Greenwald brothers assign approximately 5,500 seats in the yeshivah’s minyanim. Another four to five hundred daven at a vasikin minyan that is managed by the regular gabba’im of the daily vasikin minyan.

“One of [the] yeshivah’s fundraisers asked me what we would do if Rabbi Aaron Kotler [CEO of BMG] called Erev Rosh Hashanah and said that he needs five seats together,” said Meir Greenwald. “I told him that we would have to move people around, but that we would make it happen.”

“No one owns their seat,” said Greenwald, in a theme that seemed common to all gabba’im in such positions. “You might be entitled to a seat, and we try to be as accommodating as possible, but we have the right to move people around as needed.”

What makes the operation at BMG unique, besides its size, is that it has five minyanim in different locations; The Yashan, Beis Shalom, Beis Shmuel, Beis Ahron and the dining room. Over a thousand people fit into Beis Ahron; the same is true of the dining room. A numbered map of each seat in each of the five locations covers the walls of the temporary office.

In the hallway are computer monitors for individuals to reserve seats for themselves, provided they only need to confirm their seats from previous years.

The Greenwalds use a computer program designed specifically for BMG that shows the status of each seat; whether its occupant last year has confirmed his seat, whether it is an open place, etc. It can also bring up the whole seating history of an individual for as long as he has been davening in the yeshivah. Among other services, this system prevents any seat from being given out more than once.

Probably the largest minyan in the United States for Rosh Hashanah is at the beis medrash of the Satmar Rebbe, Harav Aharon Teitelbaum, shlita, on Williamsburg’s Hooper Street.

“We have 7,000 official seats and around 11,000 mispallelim in total,” said Shalom Lazer Frankel, the shul’s chief gabbai.

Frankel said that despite the construction of a new hanging gallery with several hundred additional places, there are still no seats available for bachurim and many newly married yungeleit.

“The only way for a new yungerman to get a place is to take it from an older person who can’t come to the beis medrash anymore, or from one of the 50 to 100 people who move from Williamsburg to Kiryas Yoel every year,” said Frankel. “We do not have a system to keep track.”

Due to the overcrowding, movement through the shul is nearly impossible, as unofficial seating spills over into the aisles. Frankel said that during Birkas Kohanim, each Kohen faces the olam from his place, as getting them all up to the front has proven too difficult and time-consuming.

At the Rachmastrivka beis medrash in Boro Park, the kehillah’s rapid growth and rising influx of outsiders who wish to daven with the Rebbe has demanded changes in the system of taking requests.

“It was not always so hard,” said Lazer Yida Fogel. “It was just a matter of taking all the names and placing them appropriately; now we really don’t have enough places for everybody.”

In previous years, the gabba’im would sit in the beis medrash the week before Selichos taking reservations. Those who had bought seats when the shul was built needed only to confirm them. Guests from Lakewood, Monsey, and Williamsburg would mostly make their reservations on the first night of Selichos. In the past, married men’s seats at the tables faced the front, and bachurim faced away. Now, bachurim stand along the wall; there are no seats for them at all, even though many extra benches have been added. Children now have their own minyan.

Now, reservations are mostly made through the mail and must be submitted around two weeks before Yom Tov.

“We can’t start to work until all the requests are in,” said Fogel. “If we give away a seat and someone who has priority comes along, we would just have to start over again.”

“As much as it is a puzzle there is also a humanitarian aspect to it,” said Nachman Wilner, who leads the seating team for the yeshivah. “Everyone is a story unto themselves. This one needs a seat for another child. Others need for a son-in-law, and so on.”

In Chaim Berlin, there is a strict order of how seats are assigned. The first priority are bachurim and yungeleit currently in the yeshivah, then come those who daven there regularly on Shabbos, and last are those who have historically made it their home for the Yamim Nora’im.

“We get all sorts of requests,” said Wilner. “Some want the aisle, others the window. Others want to be able to see the Rosh Yeshivah. We’ve heard it all. We do our best to accommodate.”