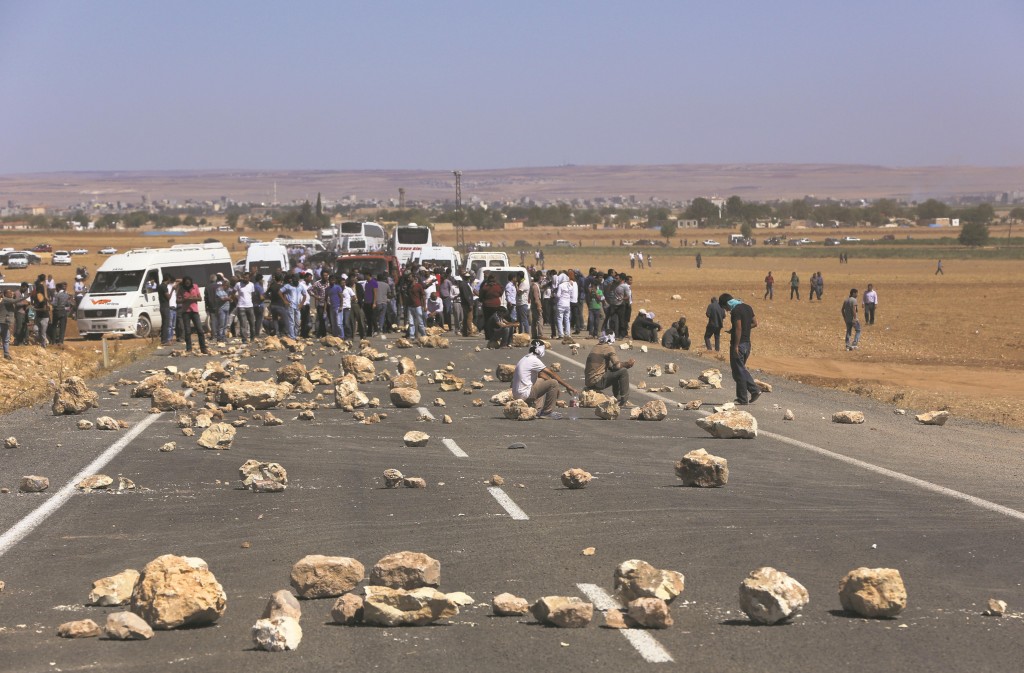 Fierce fighting Monday between the Islamic State terrorist group and Kurdish forces just over the border in Syria brought the battle closer to Turkey, triggering a surge of tens of thousands of refugees and raising pressure for the government to step up efforts to take on the Sunni terrorists.

Turkey is resisting because it fears that arming Kurdish men to fight the group could complicate peace talks with Turkish insurgents within its own borders.

The Islamic State group’s offensive against the Syrian city of Kobani, a few miles from the border, has sent 130,000 refugees to seek safety in Turkey in the last few days. The conflict in Syria had already led to more than 1 million people flooding over the border in the past 3 1/2 years.

But in addition to the refugee crisis, hundreds of Kurds in and around this city near the frontier have clashed with Turkish police, who fired tear gas and water cannons. The Kurds say Turkey is hampering their efforts to cross into Syria and help their brethren.

Spillover from Syria poses a problem for Turkey. The only local fighters capable of resisting the Islamic State group are Syrian Kurds aligned with the Kurdistan Workers’ Party, or PKK, which has fought a three-decade insurgency in southeastern Turkey.

Turkish officials have said PKK militants from Turkey are streaming to Syria to join the fight. The conflict in Syria already is inflaming tensions with Turkish Kurds and could undermine peace talks with the PKK. Turkey’s ambivalence about the fight between Kurds and the Islamic State group, which could leave the PKK either drained or emboldened, could further complicate its participation in a U.S.-led coalition against the Islamic State group.

While joining the coalition, Turkey had declined to take part in combat, citing the Turkish hostages held by the Islamic State group in Mosul, Iraq. But even after the 46 Turks and three Iraqis were freed, Turkey has not changed its stance.

Secretary of State John Kerry said Washington now expects Turkey to step up in the fight against the terrorists.

Erdogan has said that Turkey will discuss its participation in the coalition during the U.N. General Assembly.