Underwriters who helped make the Chinese e-commerce network a public company exercised an option to sell off some extra shares, bringing the total haul from the IPO to $25.03 billion, from $21.8 billion.

The sum surpasses the $22.1 billion raised by Agricultural Bank of China when it listed on the Hong Kong Stock Exchange in 2010.

The additional selloff pumps up the windfall for Alibaba founder Jack Ma, and nudges Yahoo’s haul past $6 billion after taxes.

About 48 million extra shares were sold at the $68 price offered to large investors before the listing debut, Alibaba said in a statement. When shares started publicly trading on the New York Stock Exchange on Friday, the price leaped 38 percent.

In aftermarket trading, Alibaba shares dropped another 79 cents to $89.10. 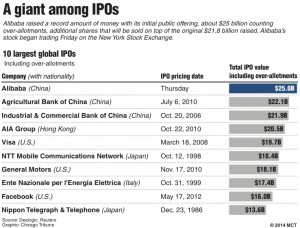 This article appeared in print in the September 23rd, 2014 edition of Hamodia.