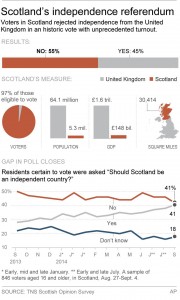 The debate over Scotland’s future fizzled amid a bitter war of words on Sunday, with the Scottish leader claiming his countrymen were “tricked” into rejecting independence in a referendum and Britain’s three main political parties bickering over how to take political reform forward.

Alex Salmond, Scotland’s outgoing independence leader, accused politicians in London of reneging on their promises to hand more power to Scots in a rare cross-party pact that he said played a crucial role in swinging the votes in favor of union in Thursday’s vote.

His comments came after Prime Minister David Cameron stressed that plans to empower Scots should be linked to constitutional reform in England — a stance that fractured the fragile political consensus and drew attacks from across the spectrum.

Just days earlier, Cameron and his political rivals had joined together in a vow to quickly pass laws to transfer key decision-making powers from London to Scotland’s capital, Edinburgh. All three party leaders signed off on the pledge, which promised Scots new powers to decide on their tax, budget and welfare policies.

Since then, Cameron said those changes must be made “in tandem” with reform in the House of Commons to bar Scottish lawmakers from having a say on bills that only apply to England and Wales — a long-standing grievance that has come to the fore amid the debate.

He also said it won’t be fair to devolve powers to Scotland without considering similar changes in the rest of the kingdom — England, Wales and Northern Ireland.

“Millions of people in the rest of the U.K. have been listening to these debates, watching this campaign and rightly asking: ‘What will change for us? Why can’t we have the same powers and the same rights as those in Scotland?’” Cameron wrote in the Mail on Sunday newspaper.

Critics say that throwing all those questions into one basket dilutes the three leaders’ joint pledge, and will inevitably delay the timetable of the promised return of powers to Scotland.

“It’s the people who voted No because they believed these commitments from the Westminster leadership — these are the people who are feeling most angry, most hurt, most disappointed in Scotland today,” Salmond told the BBC. The politician has said he will step down as Scotland’s first minister in November, after the failure of his pro-independence campaign.

All three British parties insisted they would fulfill their vow, though they clearly differed on the English reform question.

Nick Clegg, Cameron’s deputy and leader of the coalition’s junior party, the Liberal Democrats, said the promise to Scots “cannot be made contingent on other constitutional reforms.” The opposition Labour Party’s leader Ed Miliband similarly said that there could be “no ifs, no buts” about delivering new powers to Scotland.

Vernon Bogdanor, a leading constitutional expert who used to teach Cameron at Oxford University, joined others in questioning the prime minister’s ability to deliver reform on time. Cameron had set a rapid timetable, calling for legislation to be published by January and passed before he calls elections.

“Constitutional changes should not be made in a rush or for party advantage,” said Bogdanor, now at King’s College London. “To try and get this through by January or February is absurd.”

This article appeared in print on page 2 of the September 22nd, 2014 edition of Hamodia.