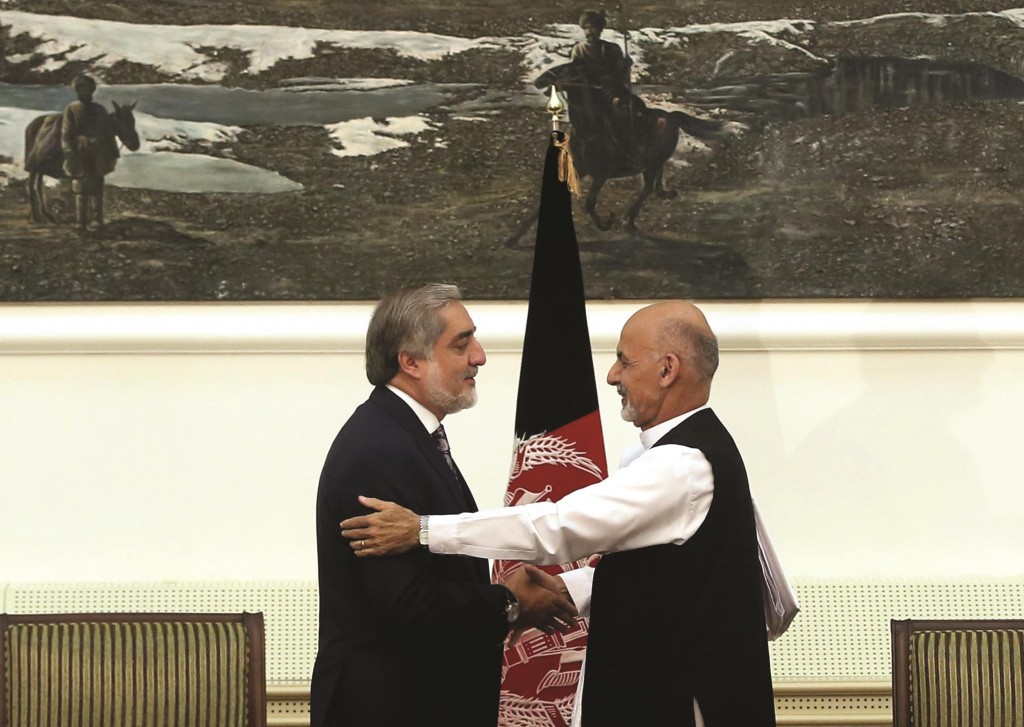 Ending months of vote-related tension, Afghanistan’s election commission named a new president on Sunday only hours after the two leading candidates signed a power-sharing deal that names one of them as the country’s new chief executive.

The commission named Ashraf Ghani Ahmadzai as the winner and next president and noted that Abdullah Abdullah will be the next chief executive. But it pointedly did not release final vote totals amid suggestions that doing so could inflame tensions.

The deal brings to a close an election season that began in April, when millions of Afghans first went to the polls despite threats from Taliban terrorists, and ended when the two leading candidates signed a national unity government agreement and embraced in a hug.

U.S. officials lauded the deal and said they believed Ghani Ahmadzai would sign a security agreement soon after taking his oath of office that would allow some 10,000 American forces to remain in Afghanistan next year. After 13 years of war following the Sept. 11, 2001 attacks, all combat troops are to withdraw by the end of 2014.

Ghani Ahmadzai and Abdullah signed the national unity government deal as President Hamid Karzai — in power since the 2001 U.S.-led invasion ousted the Taliban — looked on. It took weeks of negotiations to form a power-sharing arrangement after accusations of fraud in the June runoff vote.

“I am very happy today that both of my brothers, Dr. Ashraf Ghani and Dr. Abdullah Abdullah, in an Afghan agreement for the benefit of this country, for the progress and development of this country, that they agreed on the structure affirming the new government of Afghanistan,” Karzai said after the signing.

The deal is a victory for U.S. Secretary of State John Kerry, who first got the candidates to agree in principle to share power during a July visit to Afghanistan. Kerry returned to Kabul in August and has spent hours with the candidates, including in repeated phone calls, in an effort to seal the deal.

A senior U.S. official said the vote result is transparent but may be released slowly over fears of violence. The official insisted on anonymity because he was not authorized to be identified publicly.

The four-page power sharing contract says the relationship between president and chief executive — a position akin to prime minister — must be defined by “partnership, collegiality, collaboration, and, most importantly, responsibility to the people of Afghanistan.”