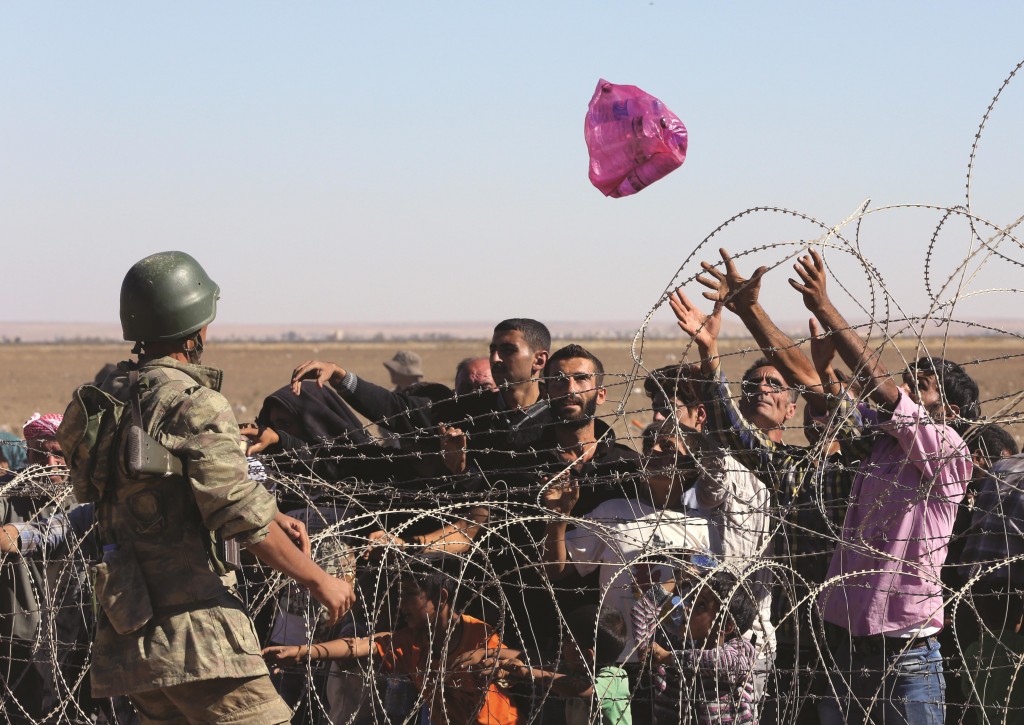 Islamic State terrorists tightened their noose on a northern Syrian border town on Sunday as the United Nations said the number of Syrian Kurds fleeing into neighbouring Turkey may have topped 100,000 and was likely to go much higher.

Residents fleeing the frontier town of Ayn al-Arab, known in Kurdish as Kobani, and its surrounding villages, said the terrorists were executing people of all ages in the areas they had seized to create a climate of fear and slavish obedience.

Kurdish politicians in Turkey renewed their
appeal to young people in the country’s mainly Kurdish southeast to head to Kobani to help their ethnic kin push back Islamic State, which has seized swathes of Iraq and Syria in recent months and proclaimed a caliphate in the heart of the Middle East.

“ISIL (Islamic State) are continuing to advance. Every place they pass through they kill, wound and kidnap people. Many people are missing and we believe they were kidnapped,” Welat Avar, a doctor, told Reuters by telephone from Kobani.

A Kurdish politician from Turkey who visited Kobani on Saturday gave a similar account of the Sunni terrorists’ tactics.

“Rather than a war this is a genocide operation … They are going into the villages and cutting off the heads of one or two people and showing them to the villagers,” Ibrahim Binici, a deputy from Turkey’s pro-Kurdish HDP party, told Reuters.

“It is truly a shameful situation for humanity,” he said, calling for international intervention.

Some Syrian Kurds compared their plight to the Yazidi minority in Iraq, which came under attack from Islamic State earlier this year. Tens of thousands of Yazidis were forced to flee their homeland of Sinjar and other villages.

The United States has carried out airstrikes against Islamic State in Iraq and has said it is prepared to extend them into Syria, but it is not clear when or where this could take place.

U.S. Ambassador to the United Nations Samantha Power said on Sunday that other countries were willing to join Washington in launching air strikes in Syria against Islamic State terrorists.

“We will not do the air strikes alone,” she told CBS. “But we’re going to leave it to other nations to announce for themselves what their specific commitments to the coalition are going to be.”

The Syrian Observatory for Human Rights, which monitors Syria’s civil war, said up to 150,000 Kurds had been displaced — internally and externally — since Islamic State launched its latest offensive against Kobani last Tuesday.

It also said that clashes overnight had killed 10 terrorists, bringing the number of Islamic State fighters killed to at least 39. At least 27 Kurdish fighters have died.

Islamic State has seized at least 64 villages around Kobani since Tuesday, using heavy arms and thousands of fighters. It executed at least 11 civilians on Saturday, including at least two boys, the Observatory said.