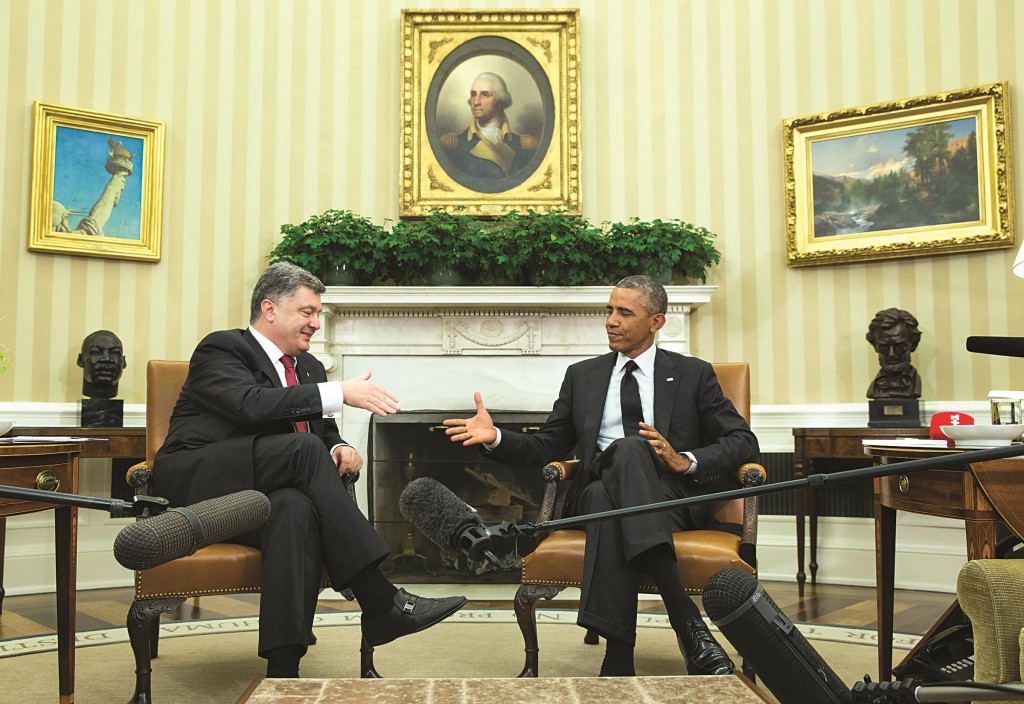 In a show of solidarity with Ukraine, President Barack Obama welcomed the new leader of the embattled former Soviet republic to the White House Thursday, but he stopped short of fulfilling his visitor’s urgent request for lethal aid to fight Russian-backed separatists.

Earlier, Ukrainian President Petro Poroshenko renewed his call for American weaponry during an emotional address to a joint meeting of Congress, where his remarks were repeatedly interrupted by applause from lawmakers in both parties. While he expressed appreciation for the non-lethal assistance from the U.S., Poroshenko said it was not enough to quell the violence that has dogged eastern Ukraine.

Poroshenko warned that greater tests lie ahead, telling Congress that his nation’s fight against Russian aggression “is America’s war, too.”

“Blankets and night vision goggles are important, but one cannot win a war with a blanket,” Poroshenko said before heading to the White House for his meeting with Obama.

Following his meeting with Obama, Poroshenko was more reserved in discussing his desire for lethal American military assistance. Asked by reporters whether he was disappointed to be leaving Washington without that commitment, Poroshenko said, “I am satisfied with the level of our cooperation with the United States of America in the defense and security sector. I cannot say more, but I am satisfied.”

Beyond the specific aid announcements, Poroshenko’s visit to Washington — his first since being elected in May — was aimed at signaling to Russian President Vladimir Putin that the United States stands steadfastly with Ukraine and its desire to boost ties with the West.

Ukraine’s turn toward Europe and the U.S. has helped bring about Russia’s threatening moves, including the annexation of the strategically important Crimean Peninsula and the support for separatists in eastern cities near Russia’s border. In recent weeks, U.S. officials have accused Moscow of not just aiding the separatists but also sending Russian troops into Ukraine.

Ukraine and the Russian-backed separatists agreed to a cease-fire on Sept. 5, but the deal has been violated repeatedly. Both sides have promised to regroup and continue fighting, if required.