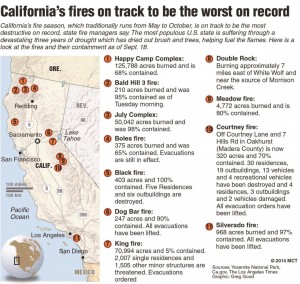 More residents of Northern California mountain communities were told to leave their homes on Thursday after an out-of-control wildfire doubled in size overnight, scorching more than 100 square miles of drought-parched timber and brush.

Nearly 3,700 firefighters struggled to stop the forward march of the King Fire, the largest and most dangerous of 11 major wildfires raging across California, but had managed to cut containment lines around just 5 percent of the flames as of Thursday morning, officials said.

The blaze raced across some 43,000 acres of forest land late on Wednesday and early on Thursday and has now burned more than 70,000 acres of state land in the El Dorado National Forest northeast of Sacramento.

Prosecutors in El Dorado county charged a man with arson on Thursday in connection with the King Fire, alleging in a criminal complaint that he “willfully and maliciously” set fire to forest land in the area.

No buildings have been destroyed since the blaze erupted on Saturday, but the California Department of Forestry and Fire Protection said some 2,000 homes and 1,500 other structures were in the path of the flames and had been evacuated.

Governor Jerry Brown declared a state of emergency late on Wednesday in response to the King Fire and a blaze farther north, putting all state resources at the disposal of his Office of Emergency Services.

This year’s California fire season is on track to be the most destructive on record, state officials say. The most populous U.S. state is suffering through a devastating three years of drought, which has dried out brush and trees, helping fuel the flames.

This article appeared in print on page 4 of the September 19th, 2014 edition of Hamodia.

See It? Squish It! Fighting the Invasive Spotted Lanternfly