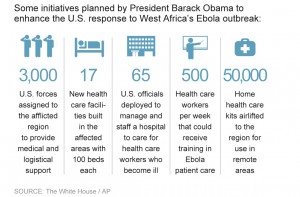 People critically ill with Ebola languishing in an ambulance for hours as paramedics seek a place for them. Treatment centers filling up as soon as they are opened. The situation is so dire in Liberia that its president welcomed a U.S. pledge to send troops and treatment centers, but said much more needs to be done.

President Ellen Johnson Sirleaf on Wednesday urged the world community to redouble efforts to battle the disease, which could spread into other countries after already hitting five West African nations.

“Our American partners realize Liberia cannot defeat Ebola alone,” Sirleaf said in a written statement. “We hope this decision by the United States will spur the rest of the international community into action … The entire community of nations has a stake in ending this crisis.”

Even as the promises of aid came, the risks of such help were underscored as yet another international health care worker fell ill while trying to help sick patients in Liberia. Doctors Without Borders — also known by its French acronym MSF —www said the female French employee would be evacuated to a special treatment center in France after being placed into isolation on Tuesday.

More than 300 health workers have become infected with Ebola in Guinea, Liberia and Sierra Leone. Nearly half of them have died, according to WHO. At least seven international health care and aid workers already have been taken abroad for treatment, and concerns over health worker infections have made it difficult to recruit the foreign help needed to combat the epidemic.

President Barack Obama announced Tuesday that he will order 3,000 U.S. military personnel to West Africa. The U.S. is also planning on delivering 17 treatment centers with 100 beds each to Liberia. American officials expect to have the first treatment centers open in a few weeks. It is unclear when all of the personnel and equipment will be on the ground.

This article appeared in print on page 4 of the September 18th, 2014 edition of Hamodia.