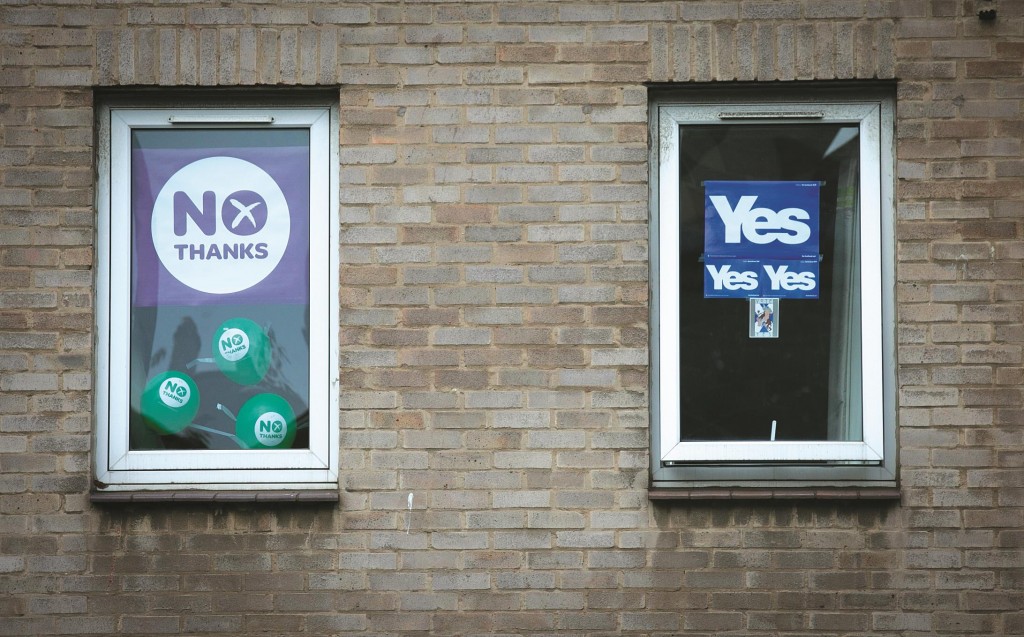 Britain promised to guarantee Scotland high levels of state funding, granting Scots greater control over healthcare spending in a last-ditch attempt to shore up support for the United Kingdom before Thursday’s vote on independence.

With polls showing the decision on the fate of the United Kingdom is too close to call, welfare spending and the future of the revered National Health System have formed a central part of nationalist Alex Salmond’s case for secession.

In a deal brokered by former Labor Prime Minister Gordon Brown, the leaders of Britain’s three main political parties said they would retain the funding equation that sustains a higher level of public spending north of the border.

“A no vote will deliver faster, safer and better change than separation,” the agreement said.

Cameron, whose job is on the line if Scots vote to break the United Kingdom, warned on his last visit to Scotland before Thursday’s vote that there would be no going back and that any separation could be painful.

British leaders accept that even if Scotland votes to keep the 307-year union, the United Kingdom’s structure will have to change as the rush to grant so many powers to Scotland will provoke calls for a less centralized state from voters in England, Wales and Northern Ireland.

Swathes of voters in the former industrial heartlands of northern England and Wales depend on state welfare spending while some English lawmakers in Cameron’s own party have asked already asked for England to be given more powers.

In the face of the biggest internal threat to the United Kingdom since Ireland broke away nearly a century ago, Britain’s establishment have united in an almost panicked effort to implore Scots that the United Kingdom is “Better Together”.

“There’s no going back from this. No re-run. If Scotland votes ‘yes’ the UK will split and we will go our separate ways forever,” Cameron, his voice at times faltering with emotion, said in Aberdeen, the center of Scotland’s oil industry.

If Scots vote for independence, Britain and Scotland would face 18 months of negotiations over everything from North Sea oil and the pound to European Union membership and Britain’s main nuclear submarine base.

The prospect of breaking up the United Kingdom, the world’s sixth largest economy and a veto-wielding permanent member of the United Nations Security Council, has prompted citizens and allies alike to ponder what would be left.

The White House said it would prefer the United Kingdom to remain “strong, robust and united.”

Sterling has fallen on the risk of a secession vote but prices for Britain’s currency, bonds and stocks indicate investors are not yet pricing in a vote for independence.

Aside from the finance and geopolitics of a secession vote, on the streets of Scotland the battle for voters was reaching its peak before the last full day of campaigning on Wednesday, when several opinion polls are due to be released.

Brown pressed the unionist case in a speech to Labor supporters in Clydebank, once home to much of Scotland’s shipbuilding industry.

“I yield to noone in my patriotic pride in being Scottish,” Brown said. “The effect on September 18 if you vote ‘Yes’ is to end every single last remaining link that exists, the connections that we have with our friends, neighbours and relatives.”

Seeking to tap into a cocktail of historical rivalry, opposing political tastes, and a perception that London has mismanaged Scotland for decades, nationalists say an independent Scotland could build a wealthier and fairer country.

Unionists say independence would needlessly break up the United Kingdom and usher in years of financial, economic and political uncertainty. They have warned that Scotland would not keep the pound as part of a formal currency union.

The debate raged on the streets and in the media.