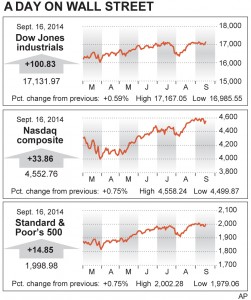 The stock market rose Tuesday as investors waited to find out when the Federal Reserve might raise interest rates.

Stocks flitted between gains and losses through most of morning, then turned broadly higher in the afternoon on gains in health care and utility stocks.

The Fed has held a key short-term interest rates close to zero for more than five years, making it cheaper for companies and consumers to borrow and boosting corporate profits. The stock market has surged as a result. But investors widely expect the Fed to start raising rates in the middle of next year.

Investors may get a better sense of how soon after the central bank concludes a two-day meeting Wednesday. Fed Chair Janet Yellen could discuss the bank’s rate plans, as well as the outlook for employment and inflation, in a press conference in the afternoon.

Until the closing minutes, the Dow Jones industrial average looked like it would rise to a record, but prices faltered at the end. Still the blue-chip index ended up gaining 100.83, its first triple-digit close since August 18. The Dow closed at 17,131.97, a gain of 0.6 percent.

Among the 10 sectors of the S&P 500, health care stocks gained the most, up 1.3 percent. Utilities and energy stocks followed, with a 1.2 percent gain each. Energy stocks were pushed higher by rising oil prices. Exxon Mobil increased 1.2 percent.

In economic news, a measure of prices that U.S. producers receive for their goods and services was unchanged in August, the latest sign that inflation is in check. A drop in wholesale gas and food prices was offset by higher prices for transportation and shipping services, the Labor Department said.

Besides the Fed press conference tomorrow, investors are awaiting a referendum on Scottish independence on Thursday. The British pound has turned volatile in recent weeks as opinion polls narrowed ahead of the vote. A “yes” decision could trigger turmoil in the market as investors ponder the economic and financial fallout.

In government bond trading, the yield on the 10-year Treasury note was unchanged from Monday at 2.59 percent.

— Humana Inc. rose $4.71 to $132.37, a gain 4 percent. The health insurer said it plans to repurchase as much as $2 billion of its own shares, double what it had previously planned. The stock has climbed 28 percent this year.

— Sears Holdings fell $3.15, or 9 percent, to $30.37. The company is taking out a $400 million short-term loan from a hedge fund run by CEO Edward Lampert, the retail company’s biggest owner. Sears has struggled against rivals like Wal-Mart Stores Inc. in recent years.

This article appeared in print on page 38 of the September 17th, 2014 edition of Hamodia.