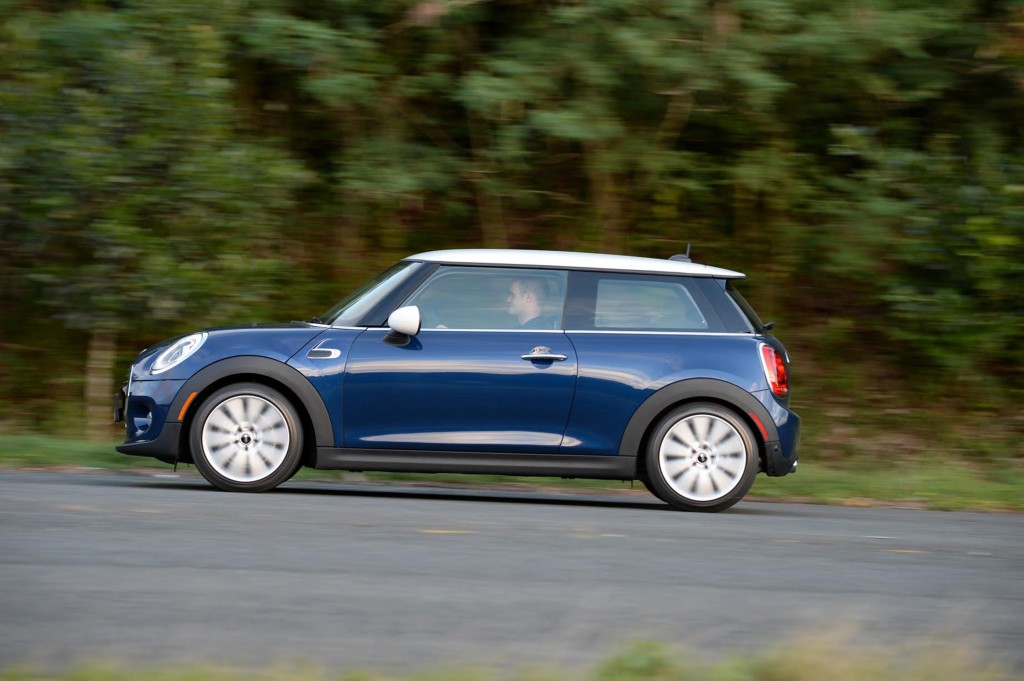 The Mini Cooper has fought hard to seem quirky and irreverent since its rebirth 12 years ago, but don’t be fooled by its charm offensive.

So the all-new 2014 Cooper and Cooper S hatchbacks include large and small changes that help nudge the cars closer to the mainstream. These upgrades are a good thing; by making the Cooper a little less weird, the automaker also makes it a bigger threat to every other premium compact hatchback on the market.

For starters, this Mini is less mini. Nose to tail, the Cooper grows 4.5 inches longer and 1.7 inches wider. The front passengers are never cramped in their nicely bolstered seats, and the cargo area swallows an extra 3 cubic feet over the previous model, for 8.7 cubic feet total.

Tidy rear seats still exist, but put people in them only as a last resort. Otherwise, the seats fold easily out of the way for an even larger trunk.

The bigger Cooper is now more functional but just as easy to park in tight urban spots. It’s also still a hoot to drive, flitting about the road like a happy shopping cart. The ride quality is a little rough, an unfortunate weakness of all modern Coopers that isn’t helped by run-flat tires.

But at least the new front-wheel-drive platform is hearty enough to soak up the bumps that the tires and suspension won’t. Good thing too, since BMW plans to use the platform in its own cars and future Minis.

The key difference between the base Cooper and Cooper S is under the hood. Both power plants are new, turbocharged and mighty. They’re also made by BMW for the first time (earlier Minis used engines built by Chrysler and then Peugeot).

The engine in the base Cooper — which starts at $20,745 — is also notable because it has just three cylinders. Once a rarity in the automotive world, these are becoming more common as companies search for more power and efficiency in a smaller package.

Some three-pot engines have the bad habit of shaking the car. But the average consumer would be hard-pressed to notice this flaw in the new Cooper.

The turbocharged 1.5-liter engine is an excellent fit for this bite-size car. Horsepower moves to 134 from 121, while torque leaps to 170 pound-feet from 114 pound-feet. It’s enough to help our test car — with the $1,250 six-speed automatic transmission — scoot from zero to 60 mph in 7.3 seconds.

Meanwhile, the $24,395 Cooper S uses a turbocharged four-cylinder engine for 189 horsepower and a maximum of 221 pound-feet of torque. Zero to 60 mph ticked by in 6.5 seconds on our tester, equipped with the six-speed manual transmission.

Though this engine gets a little noisy at high revolutions per minute, it is a study in robust refinement. The Cooper S practically begs the driver to stomp on the throttle, row the crisp, rev-matching gearbox through its six speeds and revel in the rebellious exhaust. It does all this with a liveliness that its closest competitors — VW’s Golf GTI and Fiat’s 500 Abarth — can’t match.

Mini also paid attention to the small stuff as it took the Cooper toward the mainstream.

The window switches are now on the doors, where your brain expects them to be, rather than hidden on the lower dashboard. Mini relocated the odd, pie-sized speedometer that circled that dashboard to its traditional spot in the instrument panel behind the steering wheel. And the goofy rail system for accessories and cup holders that ran through the center of the cabin is gone.

The exterior styling is still distinctly Mini, though this new version now looks a little swollen if you park it next to the earlier generations. And it actually seems to pick up some cuteness in the process.

Pricing starts reasonable, but can jump to unreasonable pretty quick. The base Cooper we tested added $12,350 in options for $33,095 out the door. The add-ons included leather, the automatic transmission, panoramic moon roof, a sport package, navigation system with real-time traffic and an 8-inch screen, and parking sensors.

By comparison, the Cooper S we tested was more of a deal. For $27,595, our Volcanic Orange (more of a strong yellow) came with things like the wonderful panoramic moon roof, 17-inch wheels and climate control.

By adding in a smart dollop of extra space and power, while taking out many of the unnecessary quirks, Mini has made its Cooper and Cooper S a better car for a larger audience. They prove that normal doesn’t have to be boring.