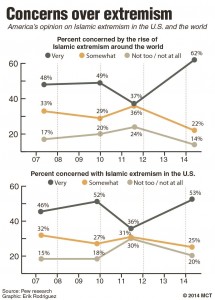 Just miles from where former Guantanamo Bay terror suspects have resettled, American warplanes take off from Qatar’s al-Udeid air base in the global war on extremism.

The contrast in images illustrates why tiny but rich Qatar is an intriguing player in what President Barack Obama says will be a long battle to stop and eventually destroy the Islamic State group in Iraq and Syria.

Qatar plays an outsize role as a U.S. military partner. It gained public praise from Obama for brokering the controversial deal that freed Army Sgt. Bowe Bergdahl from Taliban captivity in May in exchange for the release of five senior Taliban officials who had been imprisoned for years at the U.S.-run Guantanamo Bay prison in Cuba. Qatar promised Obama it would keep the five under watch for one year, although they would then be free to leave. The Obama administration also praised Qatar for its role in securing the release of hostage Peter Theo Curtis.

But Qatar also has a reputation as a supporter of Islamist groups in disfavor in Washington. Some in Congress suspect Qatar of funneling money to Islamic State terrorists, though the State Department says the U.S. has no evidence of it.

Qatari officials in Doha had no immediate comment for this story, but the government has unequivocally denied that it backs the Islamic State group. Qatari Foreign Minister Khalid bin Mohammed al-Attiyah said last month that his country “does not support extremist groups, including ISIS, in any way.”

Western analysts say Qatar is attempting a sometimes awkward balancing act between its desire for good relations with the United States and its efforts to maintain influence closer to home.

“Qatar is always looking for the angle, and that’s really the best way to explain it,” said Daniel Benjamin, a former State Department counterterrorism coordinator who now directs Dartmouth’s Dickey Center for International Understanding. “By having connections that are so broad, so wide ranging, it can put itself at the center of just about every issue.”

Qatar gives a home to Khaled Mashaal, exiled leader of Hamas. But Qatar also has maintained ties to Hamas’ enemy, Israel. And to Islamist groups including the Muslim Brotherhood, for which other Gulf states like Saudi Arabia have little tolerance.

“This is a small and wealthy country that is trying to maintain influence 360 degrees,” said Michele Flournoy, a former undersecretary of defense for policy and now chief executive officer of the Center for a New American Security.

Although it hosts U.S. military bases, it has pressured Washington not to publicly acknowledge that it flies combat missions from al-Udeid air base. Like other Persian Gulf allies, Qatar’s leaders don’t want the Pentagon to publicize that fact, because they are leery of being seen as too cozy with Washington.

The U.S. has complied, declining to confirm publicly that B-1 bombers and other U.S. warplanes are operating from Qatar’s al-Udeid. Nonetheless, it’s an open secret that U.S. planes there fly surveillance, refueling and other missions over Iraq.

Meanwhile, some members of Congress are questioning whether the United States should have the base there as well as a new arms deal with a country suspected of supporting Hamas and Islamic
extremists.

This article appeared in print on page 3 of the September 16th, 2014 edition of Hamodia.