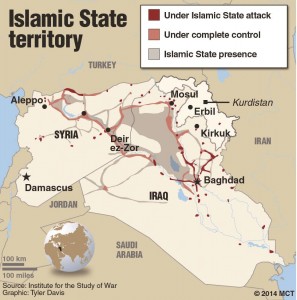 The United States signed up Arab allies on Thursday to a “coordinated military campaign” against Islamic State fighters, a major step in building regional support for President Barack Obama’s plan to strike on both sides of the Syrian-Iraqi frontier.

After talks in Saudi Arabia’s summer capital ,Jeddah, Secretary of State John Kerry won backing from 10 Arab countries — Egypt, Iraq, Jordan, Lebanon and six Gulf states, including rich rivals Saudi Arabia and Qatar — for a coalition to fight the Sunni militia that have seized swathes of Iraq and Syria.

“Arab nations play a critical role in that coalition, the leading role really across all lines of effort: military support, humanitarian aid, our work to stop the flow of illegal funds,” Kerry told a news conference.

Non-Arab Sunni power Turkey also attended the Jeddah talks but two other major regional players — Shi’ite Iran and Syria itself — were excluded, a sign of the difficulty of building a coalition across the Middle East’s sectarian battle lines.

The Arab states agreed in a communiqué to do more to stop the flow of funds and fighters to Islamic State and help rebuild communities “brutalized” by the group.

“The participating states agreed to do their share in the comprehensive fight against ISIL, including … as appropriate, joining in the many aspects of a coordinated military campaign against ISIL,” they said, using the acronym for Islamic

State in Iraq and the Levant, a former name for the group.

Kerry met the Arab leaders to drum up support a day after Obama announced his plans to strike fighters in Iraq and Syria.

U.S. officials said Kerry also sought permission to make more use of bases in the region and fly more warplanes overhead, issues that were not mentioned in the communiqué. Kerry said none of the countries in the coalition would send ground troops.

Islamic State is a Sunni group that embraces a radical vision of a Middle East ruled along 7th century precepts. Its fighters are battling a Shi’ite-led government in Iraq and a Syrian government led by Assad, a follower of an offshoot of Shi’ite Islam. They are also fighting against more moderate Sunnis in Syria and against Kurds on both side of the frontier.

An alliance against Islamic State is bound to require cooperation from countries that consider each other enemies. Washington itself supports the Shi’ite-led government in Iraq but opposes Assad in Syria; it is allied to most Sunni Arab states while hostile to Iran.

This article appeared in print on page 1 of the September 12th, 2014 edition of Hamodia.