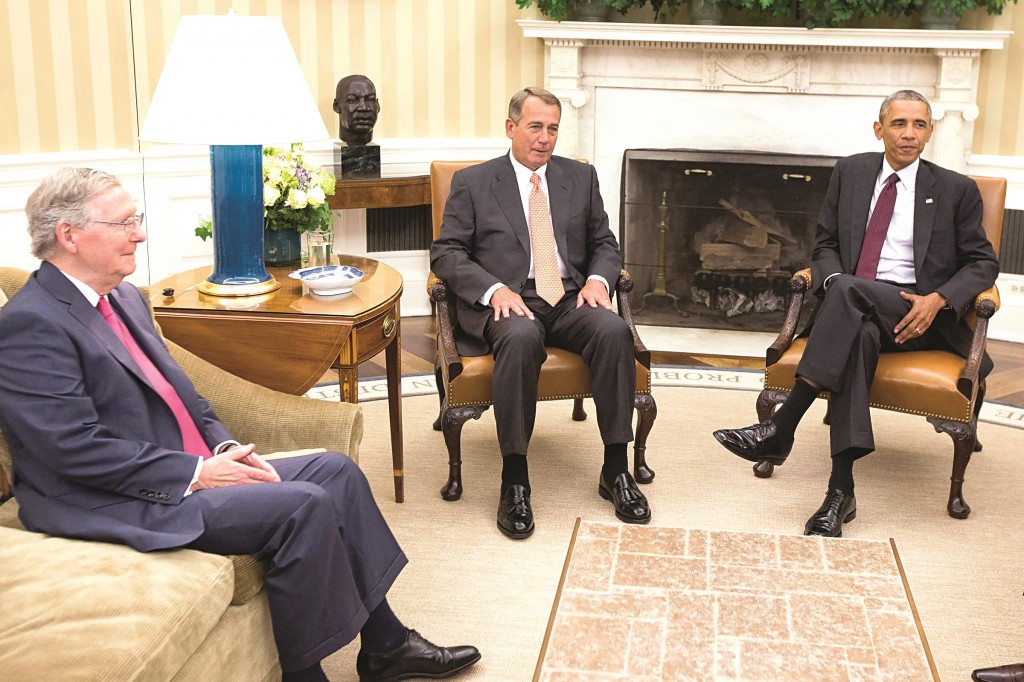 Americans overwhelmingly view Islamic State terrorists as a serious threat to vital U.S. interests and, in a significant shift, widely support airstrikes in Iraq and Syria, according to a new Washington Post-ABC News poll.

The nation’s increasingly hawkish mood will form part of the backdrop for a speech by President Barack Obama on Wednesday, when he will outline his thinking on how to confront the threat from the Islamic State. Obama’s remarks will come a day after he confers with congressional leaders at the White House about the administration’s planning.

Obama’s speech also comes at a critical moment in his presidency. He will address the nation at a time of record or near-record lows in public assessments of his performance. Only 43 percent of Americans say he is a strong leader, the lowest reading since he entered the White House. Just over half the country says his presidency has been a failure, although partisanship colors that judgment.

His overall foreign policy ratings are his lowest yet in a Post-ABC News poll. A majority says the president is too cautious when it comes to international problems and specifically in dealing with Islamic State militants. His handling of Russian aggression in Ukraine receives somewhat better marks, but more than 4 in 10 still say he is too cautious.

Over the past month, Obama has authorized limited military airstrikes in Iraq against the Islamic State and sent several hundred U.S. troops to the region to protect American personnel.

But he has faced increasing calls from lawmakers in both parties to expand the U.S. military role, not only in Iraq but also in Syria, where the administration has been reluctant to intervene directly in that country’s civil war.

The speech and session with congressional leaders are aimed at generating strong public backing and support from Congress for whatever mission Obama decides to launch. Congressional leaders said late Monday that they do not expect the White House to ask for authorization for his new strategy, according to senior House and Senate aides.

White House press secretary Josh Earnest, at his Monday briefing, stopped short of saying the president would ask for congressional authorization but made it clear that the administration is seeking to have lawmakers bear joint responsibility for the policy going forward.

Obama, in an interview Sunday on NBC’s “Meet the Press,” said the goal will be “to degrade and defeat” the Islamic State with the help of a global coalition. But he has said he will not put U.S. ground forces into Syria. On Monday, two Republican senators, Johnny Isakson, (Ga.),and Lindsey Graham, (S.C.), urged Obama to include the use of U.S. Special Operations forces as part of an air-ground operation.

Support for military action has risen dramatically in just the past few weeks, coinciding with the beheadings of two American journalists, James Foley and Steven Sotloff, which were recorded on video and released to the world by Islamic State terrorists.

Nearly as many Americans — 65 percent — say they support the potentially more controversial action of launching airstrikes in Syria, which Obama has not done. That is more than double the level of support a year ago for launching airstrikes to punish the Syrian regime for using chemical weapons.

Republicans are most supportive of military action, but sizable majorities of Democrats and independents also support airstrikes in both Syria and Iraq.

As support for military action in Iraq and Syria has risen, public assessments of Obama on foreign policy have declined. Just 38 percent approve of his handling of international affairs, and 56 percent disapprove, with 43 percent strongly disapproving. Through most of the spring and summer, his foreign policy approval rating has hovered in the mid-40s.

Obama has been criticized over the past month as appearing disengaged or reticent in the face of a series of international crises. Two moments in particular provoked negative comment. One came when he said that “we don’t have a strategy yet” for dealing with Islamic State militants. The other came when he denounced the beheading of James Foley and promptly went out for a round of golf on Martha’s Vineyard, Mass., during his vacation.