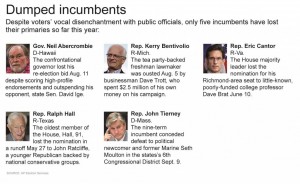 Top of The Ticket

Former Massachusetts Sen. Scott Brown, a front-runner since he announced his bid in April, glided to an easy win Tuesday in the Republican primary for Senate in neighboring New Hampshire.

Brown was one of 10 candidates on the Republican ballot seeking to challenge first-term Democratic incumbent Sen. Jeanne Shaheen in November.

That race is among those expected to decide control of the Senate for the final two years of President Barack Obama’s term.

Brown won a special election in 2010 in Massachusetts to finish the term of the late Sen. Edward Kennedy, but he lost his bid for a full term two years later to Democrat Elizabeth Warren.

Late last year he moved to New Hampshire and won praise for not taking this primary campaign for granted.

“After six years of missed opportunities at home and growing dangers around the world, we need change,” Brown said in his victory speech Tuesday.

Tierney, who prides himself on his constituent service and his record on education, barely survived the 2012 election. He edged out Richard Tisei, by just 4,330 votes.

Moulton will face Tisei, again the Republican nominee, in November.

• Massachusetts: Coakley won some measure of political redemption after her loss to Brown, a defeat that ended the Democrats’ supermajority in the U.S. Senate. She beat state Treasurer Steven Grossman and Donald Berwick, a former federal health-care administrator, to win the Democratic nomination for governor.

Tuesday was the final primary election of the 2014 midterms until Election Day — for every state but Louisiana. The same day, Nov. 4, Louisiana holds a “jungle primary,” with all candidates on the ballot, even those of the same party. If no candidate receives 50 percent-plus-one vote during the primary election, a runoff election will be held on Dec. 6 between the top two vote-getters in the primary

This article appeared in print on page 2 of the September 11th, 2014 edition of Hamodia.