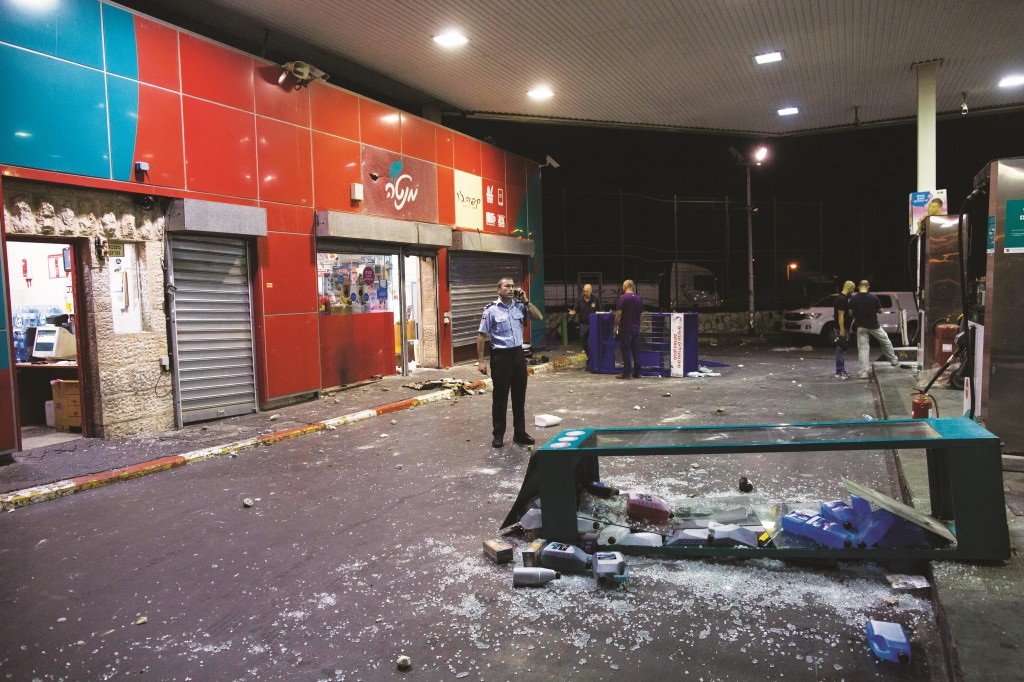 Residents of the Yerushalayim neighborhood of French Hill appealed to Public Security Minister Yitzhak Aharonovitch to respond to their plight during his tour of the area, where they live on the constant brink of Arab violence that culminated in a riot on Monday which left a gas station in ruins.

“The rioters did not have to stop at the gas station, they could have just continued on to our homes,” Eli Rosenfeld, chairman of the neighborhood council, told Aharonovitch.

Another local described for the minister the scene during Operation Protective Edge: that when air raid sirens wailed in the capital and they rushed into shelters, Arab youths in the street above were cheering for Hamas.

“I simply didn’t know where I was living,” she said, adding that shopping areas frequented by them have become bastions of support for Hamas.

Rosenfeld also criticized the decision to re-open the road leading from French Hill to Issawiyeh, which had been closed for 24 hours due to the disorders. Dozens of rioters from there had invaded the neighborhood via that road.

Aharonovitch responded that the police district commander has the authority to decide such matters, “be it [to close it] for a year or two years or 20 years.” Yerushalayim District Police Commander Yossi Pariente accompanied the minister on the tour, which included an inspection of the light rail, which has been the target of numerous attacks over the past few months.

But in general, Aharonovitch promised improvements in the security situation. “It can’t go on like this.” he told them. “You feel insecure and I am committed to provide you with security.”

“We really see this as a severe incident, and we will respond appropriately, we will arrest the perpetrators of this vandalism, the theft and the rioting,” Pariente said.

He noted that over 600 people have been arrested over the past two months for similar incidents, and that the police take vandalism of this kind “very seriously.”

“There are attacks on the light rail. I took a ride today and spoke with the management; I promised them and the residents of  Yerushalayim that we must bring back security, and we will be doing so during the next few days.” He added, “It’s important to remember that in addition to Yerushalayim, there’s also the atmosphere, [both] international and regional.”