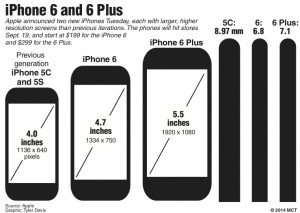 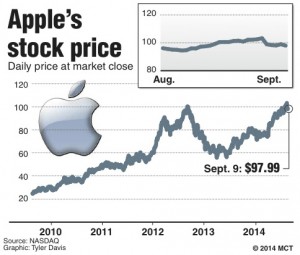 On Tuesday, Apple CEO Tim Cook debuted Apple’s first new product category since the introduction of the iPad tablet computer, showing off a new smartwatch along with two iPhones and a mobile-payments offering built into the new devices.

Apple’s smartwatch — called simply the Apple Watch — has a new user interface, with Cook declaring, “What we didn’t do was take the iPhone and shrink the user interface and strap it on your wrist.”

It will come in three different basic forms: Apple Watch, Apple Watch Sport and Apple Edition, with the last one available in 18-karat gold; Apple Watch will be a standard offering, while the Sport edition will be sturdier. The wearable computer will be highly customizable, with different sizes for the watch face and bands of different colors as well as leather and metal, with a starting base price of $350. The device will go on sale in early 2015.

Users will interact with the Apple Watch through a dial on the side, using it to scroll up and down and zoom in, or through its touchscreen, which is made of synthetic sapphire Apple has been manufacturing in Arizona. The device will have access to Apple’s voice-detection technology Siri, allowing users to guide through interactions with voice commands, and a series of gestures can help control basic functions, as well.

The watch — which must be used in tandem with an iPhone 5 or later — can record users’ vitals, with sensors detecting bodily actions such as pulse rate, and record them with HealthKit, Apple software introduced earlier this year at the Worldwide Developers Conference. More functionality will quickly be on the way: Outside developers received access to build apps for the watch through new software called WatchKit.

With its customizable form and different possible tasks, the Apple Watch can be a different device for different users’ needs, Cook said, calling it “the most personal device Apple has ever created.”

As an example, Cook said that one Apple employee has been using his smartwatch “as a remote for his iPhone camera.”

Apple introduced two new iPhones that will function with its smartwatch — a larger iPhone than before, the iPhone 6 Plus, along with the iPhone 6, which Cook described as “the best phones you have ever seen.” The iPhone 6 Plus will be 5.5 inches diagonally, a size in between a smartphone and tablet that has proved especially popular in Asia.

“Today, we are launching the biggest advancement in the history of iPhones,” Cook said.

One of the iPhone 6 smartphones’ big advances is Apple Pay, a mobile-payments offering that utilizes near-field communications to get rid of credit cards’ “outdated and vulnerable magnetic stripe,” as Cook described them. Instead of using physical cards, Apple’s iPhone will connect to users’ payment options, while not storing credit-card numbers or security codes.

Apple software leader Eddy Cue stressed the security and privacy of Apple’s payments option, which will link with American Express, Visa and MasterCard.

“Apple doesn’t know what you bought, where you bought it or how much you paid for it,” Cue said.

The service will work with 220,000 contactless machines in place at retailers, along with Apple partners such as McDonald’s and Walgreens.

Both phones will be offered in black, gray and gold. The smaller iPhone 6 will have a price tag starting at $199 with subsidies from wireless carriers, ranging up to $399 for a phone with 128 GB of memory; the iPhone 6 Plus will range from $299 to $499 with a two-year contract. Apple will begin selling the phones on Sept. 19 in the United States and eight other countries, and wants to roll out sales to more than 100 countries by the end of the year.

The two new iPhones will arrive with Apple’s newest mobile-operating system, iOS 8, which will roll out on Sept. 17, marketing guru Phil Schiller announced. Apple previously showed off the new features of iOS 8 at its Worldwide Developers Conference.

This article appeared in print in the September 10th, 2014 edition of Hamodia.