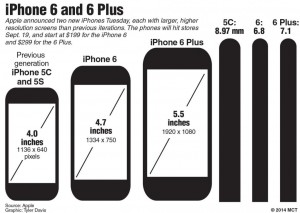 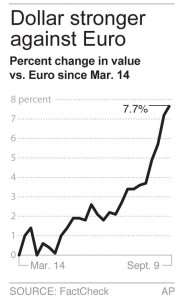 Stocks fell for a second straight day Tuesday as investors were left unimpressed by Apple’s latest batch of product announcements.

Negative news out of Home Depot and McDonald’s also weighed on the market.

Investors had little in the way of economic data to digest, so trading was largely dominated by the news out of Apple. The California-based tech titan announced an updated version of its iPhone, a smartwatch as well as payment system to compete with traditional debit and credit cards.

The iPhone 6 and its various iterations were well received by investors, as was the payment system, which would allow a shopper to purchase a product simply by holding his or her iPhone close to a sensor. Apple had been up as much as 4 percent after the products were unveiled.

The smartwatch left some investors scratching their heads, however, and the Apple rally quickly faded. The watch doesn’t come out until next year, costs $350, and would require an iPhone near it to work. It was hardly the new product category that investors had hoped it might be.

Apple is often volatile on days it announces products. Yet while the decline in Apple’s own stock was modest, its product news had ripple effects in various parts of the market.

GPS device maker Garmin and watch company Fossil fell 3.5 percent and 2 percent, respectively. Both companies are looking to claim a stake in smartwatch industry, with Garmin heavily invested in watches used by athletes to track their performance. Fossil recently announced a partnership with Intel to develop smartwatches.

Other payment system companies, such as Alliance Data Systems, also took a beating. Google, who is been trying to get into the mobile payment market as well as competes directly with Apple in phones, fell $8.71, or 2 percent, to $581.01.

Unrelated to the Apple announcement, the news out of Home Depot didn’t help the market either. Home Depot fell $1.89, or 2 percent, to $88.93 after the home improvement chain said hackers had broken into its in-store payment systems.

Home Depot’s problem follows a massive data breach at Target nearly a year ago, raising concerns it is likely other major retailers could be targeted as well.

McDonald’s, another Dow member, fell $1.41, or 1.5 percent, to $91.09 after the company announced that global sales fell nearly 4 percent in August. In the U.S., typically a steady market for the fast food giant, sales fell nearly 3 percent.

Investors also had their eyes on the currency market.

The dollar extended its rally, hitting 106.20 yen, the highest since September 2008. Compared with other major currencies hurt by bad economic news in their home countries, the dollar appears attractive. The Federal Reserve is expected to end part of its stimulus program by October and is considering rate hikes, signs of greater confidence in the U.S. economic recovery.

If the dollar were to continue to rally, it may start to hurt U.S. corporate profits. A higher dollar makes U.S.-made products more expensive abroad, which makes them harder to sell compared with foreign-made goods. Investors don’t expect the dollar rally to continue over the long term, however.

In other markets, bond prices fell slightly. The yield on the 10-year Treasury note rose to 2.50 percent.

The price of U.S. oil steadied after three days of steep drops. Benchmark U.S. crude rose 9 cents to close at $92.75 a barrel on the New York Mercantile Exchange.

Brent crude, a benchmark for international oils used by many U.S. refineries, fell sharply on further predictions of lower global demand. Brent fell $1.04 to close at $99.16 on the ICE Futures exchange in London, the lowest close since May 2013.