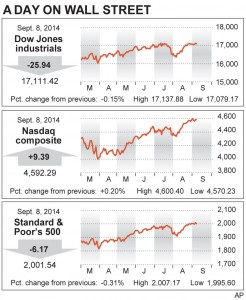 A retreat in oil and energy stocks pulled the rest of the U.S. stock market mostly lower Monday.

Campbell Soup declined after the company said its 2015 profits would miss analysts’ expectations. Yahoo, which owns a stake in Alibaba, jumped in anticipation of the giant Chinese technology company going public.

Energy stocks were by far the biggest drag on the market. The energy component of the S&P 500 fell 1.6 percent, compared to the modest 0.3 percent decline in the main index.

The decline in energy stocks was linked to a recent sell-off in the price of oil. Benchmark U.S. crude oil for October delivery fell 63 cents, or 0.7 percent, to $92.66 a barrel, the lowest price since January.

Oil prices have fallen for three days straight as geopolitical worries in Ukraine and particularly in Iraq have eased. Also impacting crude oil was a report out of China that showed manufacturing in the world’s second-largest economy was slowing down.

The three biggest decliners in the S&P 500 were oil drilling and exploration companies, which rely on high oil prices to justify pulling crude oil out of remote parts of the planet. Newfield Exploration, Nabors Industries, EOG Resources all fell 3 percent or more.

Some strategists say the decline in oil prices is likely to be temporary.

“I suspect oil cannot fall further than $90 a barrel,” said Paul Christopher, a chief international investment strategist at Wells Fargo Advisors, who focuses on the oil market. “Saudi Arabia and other OPEC members will start cutting production if oil continues to fall like this.”

Another international concern for investors is in Europe, where a drive for Scottish independence seems to be gaining momentum. Once considered a far-flung idea, a recent poll by YouGov showed rising support for a break from the United Kingdom.

Scotland’s economy is not large enough to derail the region’s economy, but a breakup of the U.K. could potentially be messy for investors, strategists say. Which of the U.K.’s bonds would go to Scotland? Can Scotland’s economy function on its own, while still using the British pound? Who would take control of the oil reserves north of Scotland?

“A vote for independence or fear of that outcome may roil financial markets over the next two weeks,” Bill Stone, chief investment strategist at PNC Asset Management, wrote in an e-mail.

Stocks in London, particularly those with links to Scotland, fell. Britain’s FTSE 100 index lost 0.3 percent. Investors also sold the British pound, which fell to lowest level in nearly a year.

—China’s Alibaba Group is seeking to raise up to $24.3 billion from its initial public offering, which would be the largest of all time. Alibaba Group is expected to make its long-awaited debut on the New York Stock Exchange later this month. Yahoo was an early investor in Alibaba and owns 23 percent of the company and is expected to be the largest seller of shares in Alibaba’s IPO. Yahoo jumped $2.22, or 5.5 percent, to $41.81.

—Campbell Soup fell $1.15, or 2.5 percent, to $43.39 after the company reported sales that were weaker than analysts were expecting. Campbell also expects its earnings to be slow next year.

This article appeared in print on page 8 of the September 9th, 2014 edition of Hamodia.