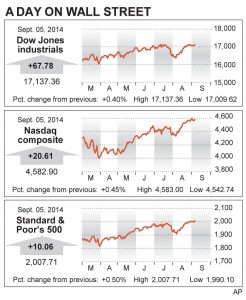 A surge in dividend-rich utility stocks helped push the Standard & Poor’s 500 index to a record Friday.

Investors bought up the stocks after the government reported that U.S. employers added fewer jobs than forecast for August. That boosted demand for bonds and pushed down their yields. In turn, stocks with big dividends became more attractive to investors seeking income-paying securities.

The stock market also got a lift from a ceasefire agreement between Ukraine and Russian-backed separatists, aimed at bringing an end to nearly five months of fighting. Stocks had slumped at the beginning of August amid worries that the conflict in Ukraine would spiral out of control and inflame tensions between Russia and the West.

“That development is a positive,” said Jerry Braakman, chief investment officer of First American Trust. “Further sanctions on Russia, and excluding them from the Western economies, sets global trade back.”

Stocks had started the day lower after a disappointing jobs report.

U.S. employers added 142,000 jobs in August, snapping a six-month streak of hiring above 200,000 and posting the smallest gain in eight months, the Labor Department said Friday. Economists had expected employers to add 220,000 jobs.

Many analysts reasoned that, while the report was disappointing, the slowdown in the pace of hiring was not drastic enough to suggest that the overall trend had changed. Friday’s news was also at odds with reports earlier this week that showed the economy is still strengthening. Construction and the service industry, for example, were strong.

“I would avoid reading too much into one number,” said Russ Koesterich, chief investment strategist at BlackRock. “This is an outlier….the weight of evidence suggests that the U.S. is going to have a decent third quarter.”

Bond prices initially rose on the disappointing hiring news. The yield on the 10-year Treasury note, which moves in the opposite direction of price, dropped as low as 2.41 percent, before gradually giving up most of its gains throughout the day and edging up to 2.46 percent from 2.45 percent on Thursday. The yield has slumped from 3 percent at the start of this year.

The early drop in bond yields boosted demand for utility stocks. The lower bond yields are, the more attractive dividend-rich utilities appear to investors who are looking for an income. The slump in bond yields this year has helped make the utilities sector the second-best performer in the S&P 500 index, with a gain of 14 percent.

The drugmaker’s stock rose $3.49, or 3.8 percent, to $95.04 after analysts at Goldman Sachs raised their rating on the stock to “buy” from “neutral,” citing the outlook for the company’s cystic fibrosis treatment.

Michael Kors was the biggest decliner in the index.

The clothing retailer fell $3.58, or 4.5 percent, to $76.39 after Sportswear Holdings, one of its principal founding stockholders, said it was selling its remaining shares in the luxury retailer. Sportswear Holdings had a 5.7 percent stake in the company.

In currency trading, the euro rebounded from a slump on Thursday, when the European Central Bank surprised markets by cutting interest rates and announcing a new stimulus program. Europe’s single currency rose 0.1 percent to $1.2952 Friday. The dollar was at 105.07 yen after rising as high as 105.71 yen, the highest level since October 2008.

Oil fell as the ceasefire between Ukraine and pro-Russian separatists removed some of the so-called fear premium.

Chinese e-commerce company Alibaba Group said after the stock market close that it was seeking to raise up to $24.3 billion in its upcoming IPO, an amount that would be the most ever raised by a company heading into its stock market debut.

This article appeared in print on page 8 of the September 8th, 2014 edition of Hamodia.