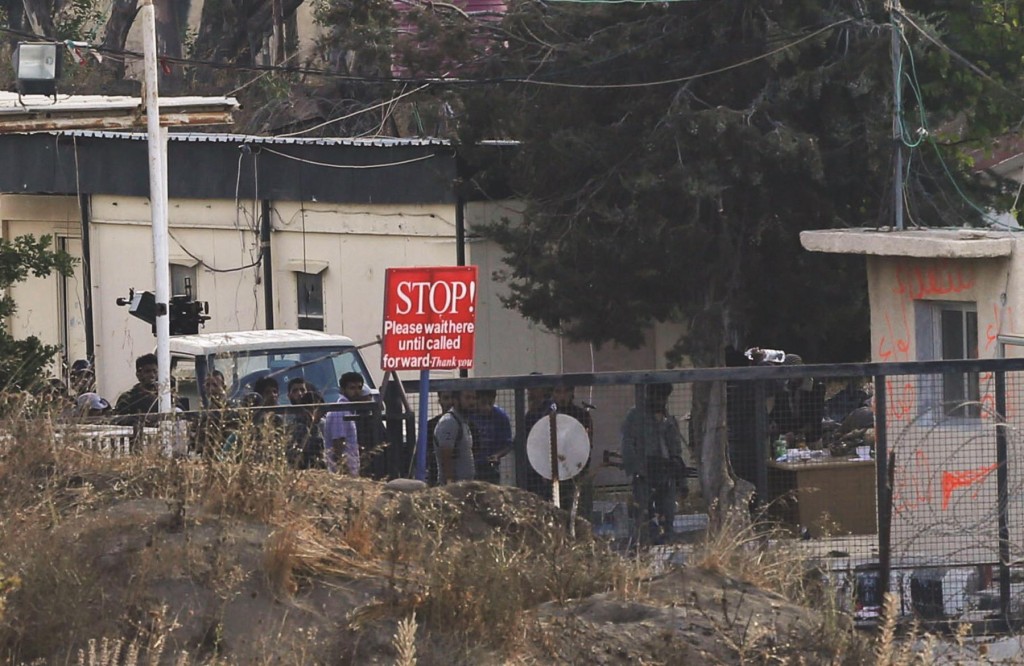 For the first time in the Syrian civil war, al-Qaida terrorists are camped on Israel’s doorstep, and Israelis in the Golan Heights who have long considered Syrian President Bashar Assad their bitter foe are now worried about something more ominous.

Last week’s seizure of the strategic Quneitra border crossing by a mix of rebels — including the Nusra Front, fighters of the Western-backed Free Syrian Army and others — has created an unprecedented situation that has brought the terrorists to within just a few yards of Israeli positions.

The Syrian government is “not our cup of tea,” said Gabi Kuniel, an Israeli who tends vineyards recently damaged by mortar shells when the violence spilled over to the Israeli-held side of the strategic Golan Heights.

But “we prefer that the Syrian army controls this region and not a group of radical al-Qaida Muslim people,” he said Wednesday, sitting behind a concrete structure near his fields to stay out of the line of fire.

As he spoke, heavy machine gunfire could be heard in the distance. Earlier, a plume of smoke rose from the Syrian side of the frontier fence.

The Nusra Front and the other rebels move around in camouflaged trucks and on foot with guns slung over their shoulders, in some cases just 50 yards away from Israeli military outposts and agricultural fields. Some Israelis are convinced it’s a matter of time before the Islamic radicals set their sights on them.

As the rebels took over the border area last Wednesday, the Israeli army ordered Kuniel’s 200 farmhands out of the fields for three days, forcing them to leave behind freshly picked fruit in vats to rot.

Then, mortar shells fell near the village of Merom Golan, setting large swaths of Kuniel’s vineyards ablaze and imparting a smoky taste to what remained of his plump grapes. Now they can be used only for cheaper wines — amounting to about $200,000 worth of damage, he estimated.

Fighting resumed near the border on Thursday, with one Syrian army projectile hitting the northern Golan Heights, apparently by mistake, the Israeli military said. The military said it returned fire at a Syrian army position, hitting it. There were no immediate reports of casualties.

Aviv Oreg, former head of the al-Qaida desk on the Israeli National Security Council, said the Nusra Front sees Israel as a “legitimate target.” He said that while the group is preoccupied with the fighting inside Syria, it is just a matter of time before it tries to strike Israel, since its fighters now “have direct access.”

Israeli defense officials estimate that a few thousand Syrian rebels are now positioned along the border in the Golan, with a few hundred in the Quneitra area, including the Nusra fighters.

Stephane Cohen, a former Israeli military liaison with UNDOF, said the peacekeeping force is rapidly collapsing and can no longer serve its purpose of enforcing a truce between Israel and Syria.

The loss of UNDOF would be a blow to Israel and leave Israelis alone “in front of al-Qaida,” Cohen said. It would also undermine regional stability, he added, since the force has provided an important outlet for Israel and Syria to air their grievances.

“In Syria there are no good guys and bad guys,” said Uzi Dayan, a former deputy military chief of staff. “There are bad guys, very bad guys and extremely bad guys.”

However, former military intelligence head Amos Yadlin is more sanguine, saying that fears of al-Qaida in Syria have been overdone.

“There is no real reason to be afraid. ISIS is an expert at PR and intimidation. They murder their prisoners in a shocking way and thereby gain media attention,” Yadlin said at an event held by the Ashkelon Academic College.

Their military gains have been overrated, contends Yadlin, who pointed out that “they only succeed in areas that no one wants to go to — the neglected Sunni areas of northeastern Syria and the deprived areas of Iraq.”

It will be a different story when they meet up with superior armed forces defending Shiite-majority cities like Baghdad and Karbala.

Yadlin said that, unlike the stubbornly entrenched Hamas, the IDF “should not have a problem” dealing with the ISIS.

Meanwhile, on Wednesday, Israel officially banned the Islamic State and anyone associating with it. The decree signed by Defense Minister Moshe Yaalon outlawed meetings of any kind between Islamic State members and declared the group an illegal organization.