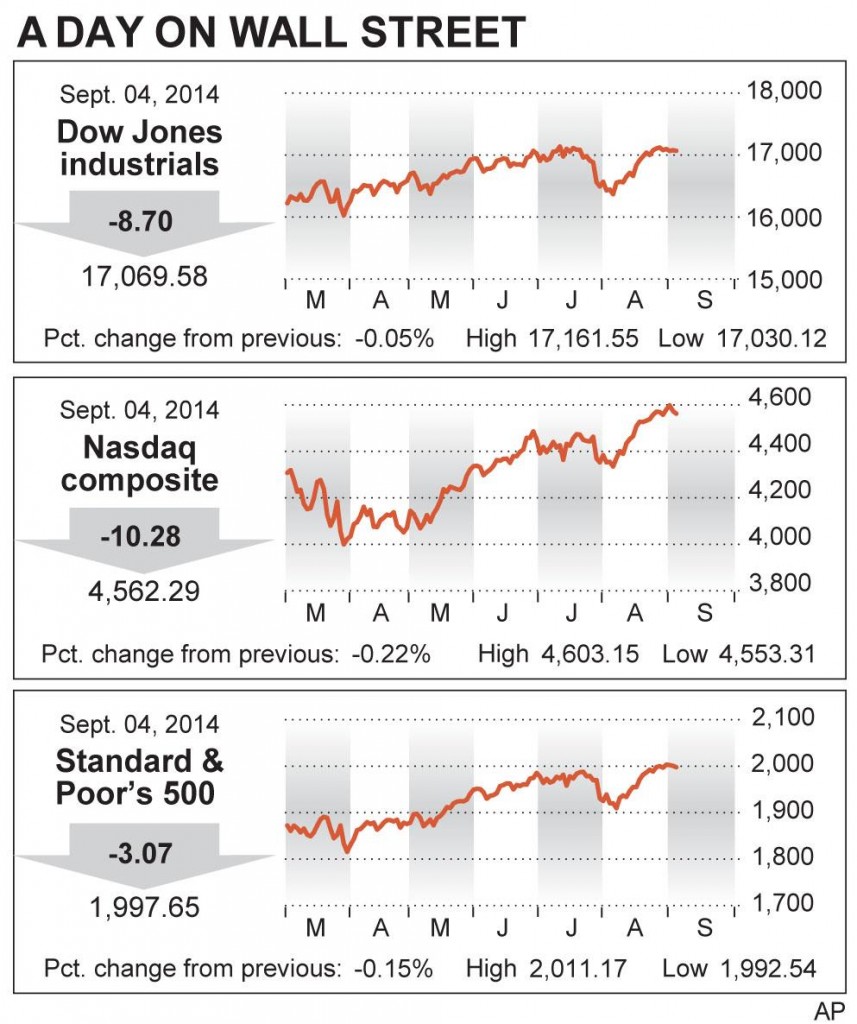 A slump in oil prices weighed on the stock market Thursday, pushing the Standard & Poor’s 500 index to its third straight loss.

Stocks had started the day higher after the European Central Bank surprised investors by announcing that it had cut its benchmark interest rate to a record low and planned to purchase asset-backed securities in an effort to stimulate the region’s ailing economy. Investors were also cheered by some encouraging reports on the U.S. economy.

The gains didn’t hold though and the market fell back during afternoon trading, as the falling price of oil pushed energy stocks lower. Oil closed the day down 1.1 percent at $94.45 a barrel, dropping after government data showed that U.S. supplies fell less than expected last week. Traders may also have been reluctant to place big bets ahead of Friday’s closely watched government jobs report.

Stocks have made a sluggish start to September, historically the worst month for the market, after surging in August. The S&P 500 gained 3.8 percent last month, climbing to a record high as it logged its best performance since February.

“The market did respond to the ECB news this morning and certainly to the good economic news, but there are definite signs that this market is stretched a bit,” said Peter Cardillo, chief market economist at Rockwell Global Capital.

Stocks had climbed in early trading, following a move higher by major indexes in Europe, after the ECB’s surprise announcement. Some analysts had been expecting the central bank to say it was preparing a new stimulus program, but most did not expect an announcement as early as this week.

The ECB said it had trimmed its benchmark interest rate to 0.05 percent from a previous record low of 0.15 percent. In a news conference, ECB President Mario Draghi also said the bank would also start purchases of private sector financial assets in October. The program aims to make credit cheaper, helping investment and growth at a time when the economy of the 18-country eurozone has stalled.

As well as boosting stocks, the announcement caused the euro to slump against the dollar, pushing it to its lowest level against the U.S. currency in more than a year. Europe’s single currency, which has been in retreat over the past few weeks on expectations that the ECB may pursue further stimulus measures, fell 1.5 percent to $1.29 per euro.

There was also encouraging news for investors on the U.S. economy on Thursday.

U.S. services firms expanded in August at the fastest pace on record. The Institute for Supply Management said Thursday that its services index rose to 59.6 last month from 58.7 in July. The August figure is the highest recorded since the measure was introduced in January 2008.

Hiring is also picking up and U.S. businesses added jobs at a healthy pace in August, according to a private survey, the fifth straight month of solid gains. On Friday, the government will issue the August jobs report. The forecast is that U.S. employers added 220,000 jobs and that the unemployment rate dipped to 6.1 percent from 6.2 percent.

The early gains for stocks then faded in the afternoon as the energy stocks sagged, declining 1.3 percent, as the price of oil dropped.

Among other stocks making big moves, PVH was the biggest gainer in the S&P 500.

The company, which owns of the Calvin Klein and Tommy Hilfiger brands, surged $11.25, or 9.6 percent, to $128.30, after reporting earnings that exceeded the expectations of Wall Street analysts.

Government bond prices fell. The yield on the 10-year Treasury note, which moves inversely to its price, climbed to 2.45 percent, from 2.40 percent late Wednesday.