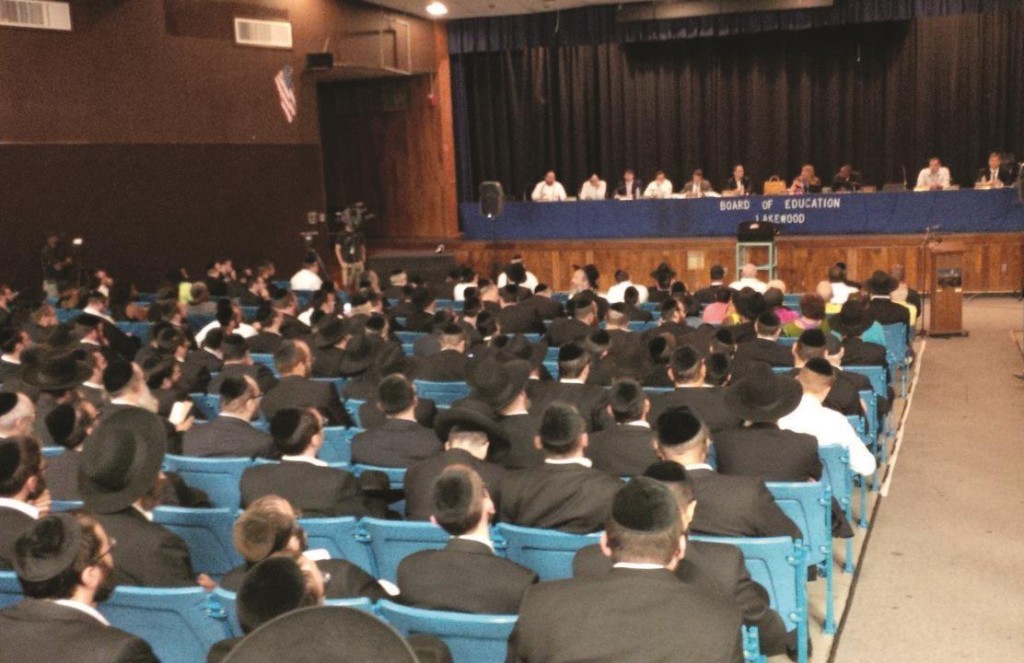 In what seemed to be a step towards alleviating Lakewood’s non-public school funding crisis, several third-party vendors have agreed to begin providing services based on letters of intent until formal contracts can be reviewed. But other vendors said that they would not allow staff to work until funding issues were resolved and payment guaranteed.

Hundreds of Lakewood parents turned out Wednesday night at an emergency meeting of the Board of Education to show their outrage over the town’s non-public schools having started the school year without new textbooks, nursing services, self-contained classes, or supplemental tutoring services.

“The focus of tonight’s meeting is to get services restored,” said Board President Isaac Zlatkin. “But we are also entitled to get answers so this does not happen again.”

Zlatkin kept his word as he issued a steady barrage of pointed questions through the evening in an attempt to establish why no information was given to schools until the first day of school, putting them into crisis mode.

The audience packed the Lakewood High School auditorium as board members and district officials hashed out each of the main points of the situation. The majority of the people there were parents from the Orthodox community coming to show support for immediate reinstatement of services. However, a vocal minority of public school parents cheered loudly at every accusation of non-compliance in private schools.

“We like to work with contracts in June,” said the school district’s attorney, Marc Zitomer, whose office prepares all vendor contracts, including those for nursing and support services. Zitomer went on to say that information was repeatedly requested from the district, but it was supplied in “drips and drabs,” making it impossible to prepare the necessary documents in time for the opening of the school year.

When questioned about the district’s role in preventing nursing, textbooks and other services from being provided, Superintendent Laura Winters responded “we are understaffed in the business office.”

“That’s a completely unsatisfactory answer,” said Josh Pruszansky of the New Jersey office of the OU’s Advocacy Center in an interview with Hamodia after the meeting. “The administrations of the schools should at the very least have been notified.”

Mr. Pruzansky, speaking Wednesday night, clarified a key issue. “All the funding for these programs is federal and state money. It has nothing to do with Lakewood’s tax dollars or the district’s budget.” He added that it is, however, the responsibility of the district to allocate the funds properly and assure compliance. In fact, he added, the district is paid an additional administrative fee for providing this service to non-public schools.

“Vendors now have nursing contracts,” said Mr. Zitomer. “I hope that they get them signed quickly so nurses can be in schools by Friday.”

The second major issue was the withholding of services paid for by the federal Title One program and state clauses 192 and 193, such as tutoring, shadowing, speech therapy, and a wide array of other support services.

The decision to withhold funding was made by state-appointed monitor Michael Azzera, who since May has been delegated significant powers traditionally held by the board.

“I am trying to prevent the district from having to return any more money,” said Azzera when questioned about the decision.

Mr. Zlatkin explained to Hamodia that since Azzera’s appointment in May, approximately $4 million has had to be returned to the state due to findings of non-compliance.

“The district did not know a lot of the rules,” said Zlatkin. “Mosdos were never asked to submit key reports.” He said that since these findings, additional staff has been hired to ensure compliance in the future.

Zlatkin agrees that a key condition of Title One funds is that they are meant to “support and not to supplant,” that is, they are intended to aid but not replace classroom study, and thus cannot be administered during core curriculum class hours. Azzera claims that at present, the way Lakewood’s non-public schools deliver these services is in violation of the law. This being the case, he will not release the funds until full compliance is achieved.

“However, we had auditors in the schools for 18 months and no one said that there were any violations in how 192 is used,” said Zlatkin, who posits that the present objections originate from Azzara’s interpretations and not indisputable laws.

Azzera announced Wednesday night that he had arranged a meeting in Trenton between the board, administrators, private school personnel, and state officials to arrive at a long-term solution to the funding and compliance issues.

“We are working with the district to ensure that children will be given services while talks are going on,” said Mr. Zlatkin. “Just because there are issues to work out, we should not have to put everything on hold.”