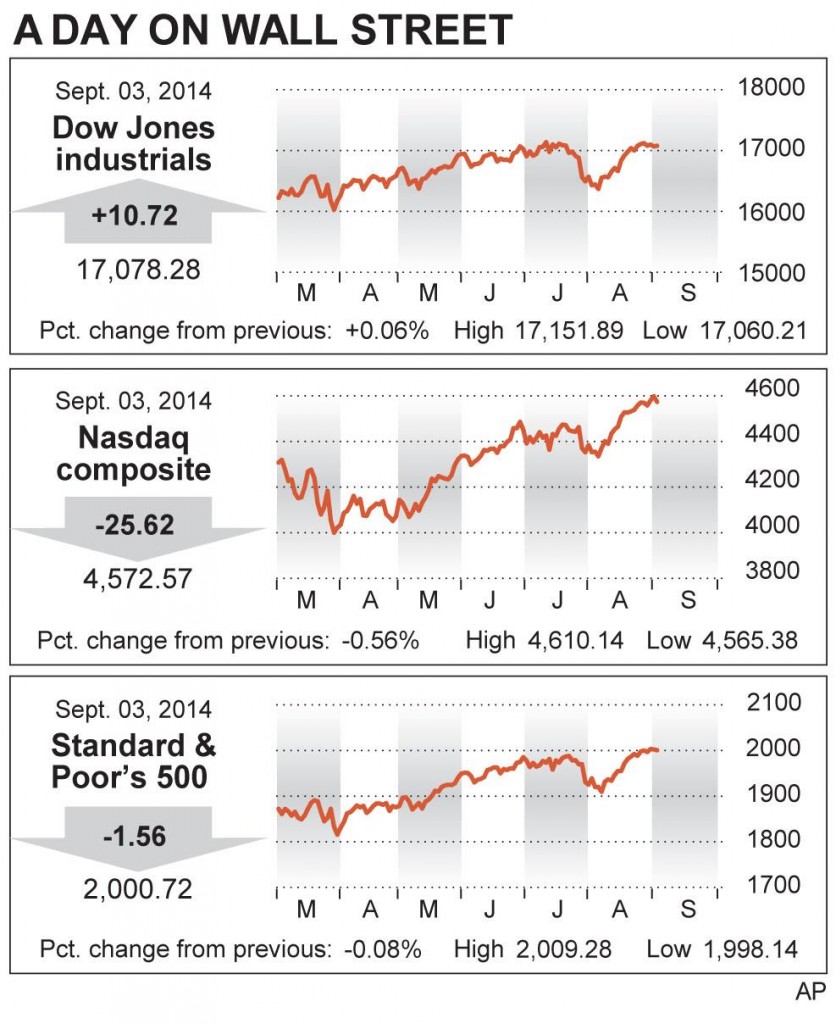 The relief that greeted reports of a possible ceasefire in Ukraine faded on Wall Street, as a slide in Apple and other technology stocks tugged the U.S. stock market to a small loss Wednesday.

News that Russia and Ukraine were working on a ceasefire agreement rippled through markets early, lifting stocks in Europe and pushing up oil prices. In the U.S., the stock market headed higher at the start of trading then sagged in the afternoon.

One reason was Apple, the market’s top heavyweight. The tech giant’s stock slumped $4.36, or 4 percent, to $98.94 after its rival, Samsung, introduced two Galaxy smartphones with displays aimed at quick access to frequently used applications. Analysts expect Apple to unveil iPhones with bigger screens next week.

Shares in other big tech companies, including Amazon and Facebook, also fell than 1 percent or more. Of the 10 sectors in the Standard & Poor’s 500 index, technology companies lost the most.

Markets have barely moved this week even with news that, in other times, might cause investors to cheer.

Any good news has to be unusually good to push the S&P 500 past 2,000 and further into record territory, said Uri Landesman, president of Platinum Partners, an investment fund in New York.

“Above 2,000, discretion is the better part of valor,” Landesman said. “Most people are kind of reluctant to jump in right now.”

Another encouraging report on the U.S. economy came out Wednesday. The Commerce Department said that orders for U.S. factory goods shot up 10 percent in July, the biggest one-month jump on records going back to 1992. That followed strong figures for manufacturing activity and construction spending on Tuesday.

“Everything right now is pointing to greater market strength,” said Jonathan Golub, chief U.S. market strategist at RBC Capital Markets. “What usually stops bull markets? It’s almost always a recession.” And there are no signs of a recession on the horizon, he said.

In Europe, markets surged following reports that Russian President Vladimir Putin and his Ukrainian counterpart had agreed to the broad terms of a peace plan to stop the fighting in eastern Ukraine. Ukraine and Western countries say Russia has armed insurgents in eastern Ukraine. Moscow denies it.

Craig Erlam, market analyst at Alpari, said the reports of a ceasefire were “welcomed with open arms by the markets.”

The hope, he said, must be that economic sanctions on Russia would soon be lifted, which could help the European economy reclaim lost ground.

“We can’t forget that the effects of the crisis have been felt in many countries beyond those directly involved,” said Erlam.

The crisis in Ukraine has played a role in hampering the European economic recovery this year. In its monthly survey of the 18-country eurozone, financial information company Markit pointed to the conflict as a culprit behind a sharp fall in its gauge of business activity. Some economists expect the European Central Bank to announce new measures on Thursday to help pull the region out of a rut.

Back in the U.S., Delta Air Lines tumbled 5 percent, the steepest drop of any company in the S&P 500. The airline cut estimates for a measure of revenue, blaming “events in Russia, the Middle East and Africa,” an apparent reference to fighting in eastern Ukraine, war in Syria, and an Ebola outbreak in West Africa. Shares in Delta dropped $2.11 to $38.82.

U.S. government bond prices inched up. The yield on the 10-year Treasury note slipped to 2.40 percent, down from 2.42 percent late Tuesday.

The price of oil rose sharply on hopes that the possible accord between Russia and Ukraine would lead to increased economic activity and oil demand in Europe. Benchmark U.S. crude oil jumped $2.66 to close at $95.54 a barrel in New York. Brent crude, a benchmark for international oils used by many U.S. refineries, climbed $2.43 to $102.77 in London. Wholesale gasoline rose 7.7 cents to close at $2.620 a gallon. Natural gas fell 4.3 cents to close at $3.847 per 1,000 cubic feet.